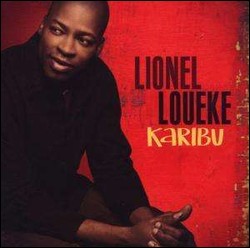 Lionel Loueke (born 27 April 1973) is a guitarist and vocalist born in Benin. He moved to Ivory Coast in 1990 to study at the National Institute of Art.[1] He attended the American School of Modern Music in Paris, France from 1994–1998. In 1999, Loueke was awarded a scholarship to Berklee College of Music, where he earned a degree in Jazz Performance in 2000.

Lionel Loueke grew up in what he has described as a family of poor intellectuals in the West African country of Benin. He began playing percussion instruments around the age of 9 but was influenced by an older brother who played guitar, which he began playing himself in his late teens. It took Loueke a year to earn the $50 he needed to buy his first guitar. However, he could not afford to replace the strings, which had to be ordered from Nigeria. Instead, he soaked his strings in vinegar to keep them clean. When the strings broke, he had to replace them with bicycle brake cables which were hard on his fingers.

Loueke got his first professional job by accident. At a club during a break, he took a guitar from the bandstand and started playing it. The club's manager heard him and offered him a job. He played African pop music but discovered jazz when a friend returned from Paris with a copy of an album by jazz guitarist George Benson. This inspired Loueke to study jazz in Paris. He won a scholarship to the Berklee College of Music in Boston. In 2001, he auditioned for the Thelonious Monk Institute of Jazz at the University of California Los Angeles. He was selected in a worldwide search by a panel of judges, including jazz musicians Herbie Hancock, Terence Blanchard, and Wayne Shorter. He attended the Institute until 2003.

Loueke formed the trio Gilfema with Massimo Biolcati (bass) and Ferenc Nemeth (drums), classmates from the Berklee College of Music, and released two albums on the ObliqSound label: Gilfema (2005), and Gilfema + 2 (2008), featuring clarinet players Anat Cohen and John Ellis. Under his own name, Loueke recorded the live album In a Trance released by Space Time Records in 2005 and Virgin Forest, which was released by ObliqSound in 2006.

Loueke made his major-label debut in 2008, when Blue Note released his album Karibu.[1] NPR.org praised the guitarist for his fusion of traditional African music with modern jazz harmonies, vocal inflections, and complex time signatures.[2] The album features Biolcati and Nemeth, as well as guest appearances by Hancock and Shorter. His album, Mwaliko (2010), is a collection of duo and trio performances that mixes traditional West African music and jazz. Guests include fellow Benin native Kidjo, Cameroonian bassist and singer Richard Bona, bassist Esperanza Spalding, and drummer Marcus Gilmore, doing a version of Shorter’s classic composition "Nefertiti".

In early 2008, Loueke's "Kponnon Kpété" won in The 7th Annual Independent Music Awards for Best Traditional World Song. His Virgin Forest was nominated for World Fusion Album of the year.[3]

Along with playing guitar, Loueke sings. The singing includes Xhosa-inspired aspects, such as clicks (e.g., Nonvignon from Karibu). Loueke doesn't in fact speak Xhosa, and the singing is akin to scatting, having no linguistic meaning.[4]

In 2009 Loueke won a Fellow Award from United States Artists.[6]

This article uses material from the article Lionel Loueke from the free encyclopedia Wikipedia and it is licensed under the GNU Free Documentation License.