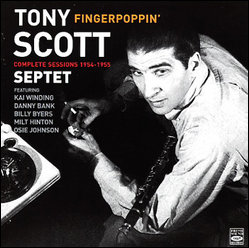 Tony Scott (born Anthony Joseph Sciacca June 17, 1921 - March 28, 2007) was an American jazz clarinetist and arranger known for an interest in folk music around the world. For most of his career he was held in some esteem in New Age music circles because of his decades-long involvement in music linked to Asian cultures and to meditation.

Despite this he remained relatively little-known as the clarinet had been in eclipse in jazz since the emergence of bebop. In 1959 he left New York City, where he had been based, and abandoned the United States for a time. In the 1960s he toured South, East, and Southeast Asia. This led to his playing in a Hindu temple, spending time in Japan, and releasing Music for Zen Meditation in 1964 for Verve Records. In 1960 a Down Beat poll for Japan saw readers there name him best clarinetist[6] while the United States preferred Buddy DeFranco. More recently he did a Japanese special on Buddhism and Jazz, although he continued to work with American jazz musicians and played at the Newport Jazz Festival in 1965.

In 1967 he put out his first album in eight years entitled Tony Scott: Homage To Lord Krishna. In the years following that he worked in Germany, Africa, and at times in South America.

He settled in Italy in the 1970s, working with Italian jazz musicians such as Franco D'Andrea and Romano Mussolini. He also played the part of a Sicilian-American Mafia boss in Glauber Rocha's film Claro (1975). In later years he began showing an interest in Electronica and in 2002 his Hare Krishna was remixed by King Britt as a contribution to Verve Remixed.

In 2010, a documentary film by the Italian director Franco Maresco about the life of Tony Scott was released titled Io sono Tony Scott, ovvero come l'Italia fece fuori il più grande clarinettista del jazz (English: I am Tony Scott. The Story of How Italy Got Rid of the Greatest Jazz Clarinetist).[7]

This article uses material from the article Tony Scott (musician) from the free encyclopedia Wikipedia and it is licensed under the GNU Free Documentation License.