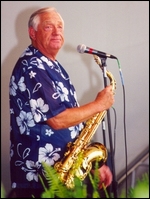 Homer Louis "Boots" Randolph III (June 3, 1927 – July 3, 2007) was an American musician best known for his 1963 saxophone hit "Yakety Sax" (which became Benny Hill's signature tune). Randolph was a major part of the "Nashville sound" for most of his professional career.

At the end of World War II, Boots Randolph played saxophone, trombone, and vibraphone in the United States Army Band. After his service in the Army, he played with Dink Welch's Kopy Kats in Decatur, Illinois, from 1948 to 1954. He briefly resided in Louisville, Kentucky, before returning to Decatur to start his own group. He left Decatur in 1957.[2]

During his forty-plus year career, Randolph performed in hundreds of venues alongside many artists in pop, rock, jazz, and country music. He played on many recording sessions with Elvis Presley and also performed on soundtracks for a number of Presley's motion pictures, one popular song being "Return to Sender".

Randolph recorded for Monument Records in Nashville and played on Roy Orbison's 1963 hit, "Mean Woman Blues."[2] He was also featured on "Little Queenie" by REO Speedwagon, "Java" by Al Hirt, "Turn On Your Love Light" by Jerry Lee Lewis, and "Rockin' Around the Christmas Tree" by Brenda Lee. He was present on many recordings by guitarist Chet Atkins with whom he often performed. Early in his career, he often billed himself as Randy Randolph.

As a solo recording artist, Randolph placed four singles in the Top-100 between 1963 and 1967. The most successful of these was "Yakety Sax", which reached #35 in 1963 and stayed on the charts for nine weeks.[3] Randolph was also successful on Billboard Magazine's album charts, having fourteen entries between 1963 and 1972. Boots With Strings from 1966 reached #36 and stayed on the chart for nearly two years.[4]

In 1977, Randolph opened a successful club of his own in Nashville's "Printer's Alley." He also frequently appeared on the television program Hee Haw, and was a member of the Million Dollar Band.

On July 3, 2007, Randolph died at Skyline Medical Center in Nashville, Tennessee, after suffering a brain hemorrhage.[2] He had celebrated his 80th birthday just one month prior.

This article uses material from the article Boots Randolph from the free encyclopedia Wikipedia and it is licensed under the GNU Free Documentation License.