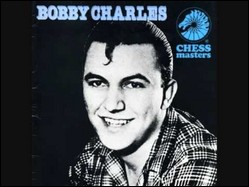 An ethnic Cajun, Charles was born in Abbeville, Louisiana, and grew up listening to Cajun music and the country and western music of Hank Williams. At the age of 15, he heard a performance by Fats Domino, an event that "changed my life forever," he recalled.[2]

Charles helped to pioneer the south Louisiana musical genre known as swamp pop. His compositions include the hits "See You Later, Alligator", which he initially recorded himself as "Later Alligator", but which is best known from the cover version by Bill Haley & His Comets, and "Walking to New Orleans" and "It Keeps Rainin'", written for Fats Domino.

Because of his south Louisiana–influenced rhythm and blues vocal style, Charles has sometimes been thought to be black, when in fact he was white.[3]

Charles was invited to play with the Band at their November 26, 1976, farewell concert, The Last Waltz, at the Winterland Ballroom in San Francisco. In the concert, Charles played "Down South in New Orleans", with the help of Dr. John and the Band. That song was recorded and released as part of the triple-LP The Last Waltz box set. The performance was also captured on film by director Martin Scorsese, but did not appear in the final, released theatrical version. Charles did, however, appear briefly in a segment of the released film—in the concert's final song, "I Shall Be Released". In that segment, his image is largely blocked from view during the performance. That song, sung by Bob Dylan and pianist Richard Manuel, featured backup vocals from the entire ensemble, including Charles.[4]

He co-wrote the song "Small Town Talk" with Rick Danko of the Band. "Promises, Promises (The Truth Will Set You Free)" was co-written with Willie Nelson.

Charles continued to compose and record (he was based out of Woodstock, New York, for a time) and in the 1990s he recorded a duet of "Walking to New Orleans" with Domino.

In September 2007, the Louisiana Music Hall of Fame honored Charles for his contributions to Louisiana music with an induction.

This article uses material from the article Bobby Charles from the free encyclopedia Wikipedia and it is licensed under the GNU Free Documentation License.