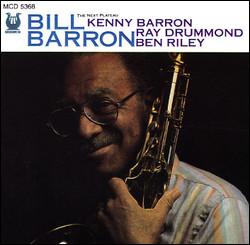 Barron was born in Philadelphia, Pennsylvania.[1] He first appeared on a Cecil Taylor recording in 1959, and he later recorded extensively with Philly Joe Jones and co-led a post-bop quartet with Ted Curson. His younger brother, pianist Kenny Barron, appeared on all of the sessions that the elder Barron led.[1][2] Other musicians he recorded with included Charles Mingus and Ollie Shearer.

Barron also directed a jazz workshop at the Children's Museum in Brooklyn, taught at City College of New York, and became the chairman of the music department at Wesleyan University.[1] He recorded for Savoy, recording that label's last jazz record in 1972,[1] and Muse. The Bill Barron Collection is housed at the Institute of Jazz Studies of the Rutgers University libraries.[3]

This article uses material from the article Bill Barron (musician) from the free encyclopedia Wikipedia and it is licensed under the GNU Free Documentation License.