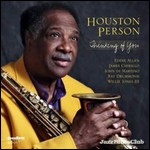 Houston Person (born November 10, 1934) is an American jazz tenor saxophonist and record producer. Although he has performed in the hard bop and swing genres, he is most experienced in and best known for his work in soul jazz. He received the Eubie Blake Jazz Award in 1982.

Person grew up in Florence, South Carolina, and first played piano before switching to tenor saxophone.[1] He studied at South Carolina State College where he was inducted into the school's Hall of Fame in 1999.

In the United States Air Force, he joined a service band stationed in West Germany, and played with Don Ellis, Eddie Harris, Cedar Walton, and Leo Wright. He later continued his studies at Hartt College of Music in Hartford, Connecticut.

He first became known for a series of albums for Prestige in the 1960s. Contrary to popular belief, he was never married to the vocalist Etta Jones, but did spend many years as her musical partner, recording, performing and touring, and for much of his career this association was what he was best known for. They first met playing in organist Johnny Hammond's band.

Person has been a resident of Newark, New Jersey.[3]

This article uses material from the article Houston Person from the free encyclopedia Wikipedia and it is licensed under the GNU Free Documentation License.

Oskar Wilhelm Böhme Danse russe op. 32
Update Required To play the media you will need to either update your browser to a recent version or update your Flash plugin.