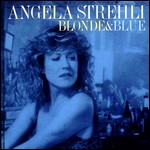 Angela Strehli (born November 22, 1945, Lubbock, Texas, United States) is an American electric blues singer and songwriter. She is also a Texas blues historian and impresario.[1] Despite a sporadic recording career, Strehli spends time each year performing in Europe, the US and Canada.[1]

In the early 1960s, Strehli learned the harmonica and bass guitar before becoming a vocalist.[1] In 1966 she visited Chicago, and attended concerts given by Howlin' Wolf, Muddy Waters and Buddy Guy. In her final university year, Strehli and Lewis Cowdrey formed the Fabulous Rockets. Strehli then sang as a backing vocalist for James Polk and the Brothers and assisted with Storm, which had been formed by Cowdrey and Jimmie Vaughan.[2]

In 1972, she was a founding member of Southern Feeling, along with W. C. Clark and Denny Freeman. Three years later Strehli became the stage manager and sound technician at Antone's, a nightclub in Austin, Texas. By 1986, Strehli had recorded Stranger Blues (EP) which help launch Antone's own record label.[2] Her debut album was Soul Shake (1987, Antone's Records), and she appeared on Dreams Come True, with Lou Ann Barton and Marcia Ball (1990). Her own effort Blonde and Blue (1993, Rounder Records) assisted in building the Austin, Texas blues scene, alongside nightclub owner Clifford Antone, Kim Wilson, Stevie Ray Vaughan and Jimmie Vaughan.[1] In 1998, Strehli released Deja Blue, and Blue Highway followed in 2005.[1]

Strehli is now based in San Francisco.[1]

This article uses material from the article Angela Strehli from the free encyclopedia Wikipedia and it is licensed under the GNU Free Documentation License.