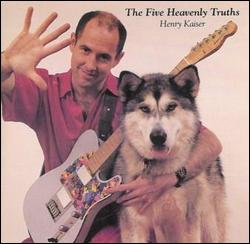 Recording and performing prolifically in many styles of music, Kaiser is a fixture on the San Francisco Bay Area music scene. He is considered a member of the "first generation" of American free improvisers.[1]

His grandfather was the industrialist Henry J. Kaiser. In 1978, Kaiser founded Metalanguage Records with Larry Ochs (Rova Saxophone Quartet) and Greg Goodman. In 1979 he recorded With Friends Like These with Fred Frith, a collaboration that lasted for over 20 years. In 1983 they recorded Who Needs Enemies, and in 1987 With Enemies Like These, Who Needs Friends? They joined with fellow experimental musicians John French, and English folk-rocker Richard Thompson to form French Frith Kaiser Thompson for two eclectic albums, Live, Love, Larf & Loaf (1987) and Invisible Means (1990). In 1999 Frith and Kaiser released Friends and Enemies, a compilation of some of their earlier work together with new recordings.

In 1991, Kaiser went to Madagascar with fellow guitarist David Lindley, where they spent two weeks recording music with Malagasy musicians. Three volumes of this music were released by Shanachie under the title A World Out of Time.

In 2001, Kaiser spent two and a half months in Antarctica on a National Science Foundation Antarctic Artists and Writers Program grant. He has subsequently returned to work as a research diver. His underwater camerawork was featured in two Werner Herzog films, The Wild Blue Yonder (2005) and Encounters at the End of the World (2007), which he also produced, and for which he and Lindley composed the score. Kaiser served as music producer for Herzog's Grizzly Man (2005).

This article uses material from the article Henry Kaiser (musician) from the free encyclopedia Wikipedia and it is licensed under the GNU Free Documentation License.