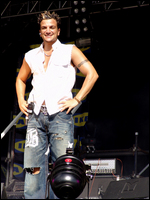 His ex-wife is glamour model Katie Price, with whom he had two children. In 2006 he released an album with then-wife Price, A Whole New World.

In 2009, he released Revelation with a new single "Behind Closed Doors" which reached #4 on the UK Singles Charts. This was followed by Accelerate in 2010.

Andre was born in London, England but moved with his family to Australia when he was six years old. The family settled on the Gold Coast in Queensland. In 1989, at age 16, Andre became a contestant on Hey Hey It's Saturday 'New Faces' on which he was offered a recording contract for £46,000. During his teenage years Andre dated Elizabeth Pirie and attended Benowa State High School on the Gold Coast.

In July 2010 Andre, alongside Jason Manford was a Team Captain on the ITV entertainment series Odd One In, the show returned for a second series the following year.

In 2013, he was a guest judge on ITV entertainment series Your Face Sounds Familiar.

For five episodes, he guest presented Sunday Scoop in 2013 on ITV.

In 2014, he released his new song "Kid" for the movie Mr. Peabody and Sherman and the lead single from his album "Big Night"[2]

André married Katie Price on 10 September 2005. They have two children: son Junior Savva, born on 13 June 2005,[3] and daughter Princess Tiaamii Crystal Esther, born on 29 June 2007.[4] While married to Price, Andre was stepfather to her son Harvey, a blind and autistic child from Price's earlier relationship with football player Dwight Yorke.[5]

Since 16 July 2012 Andre has been in a relationship with medical student Emily MacDonagh.[8] MacDonagh gave birth to Andre's third child, a girl named Amelia, on 7 January 2014.[9]

This article uses material from the article Peter Andre from the free encyclopedia Wikipedia and it is licensed under the GNU Free Documentation License.