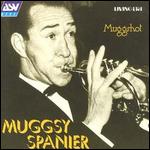 Francis Joseph Julian "Muggsy" Spanier (November 9, 1901 February 12, 1967) was a prominent cornet player based in Chicago. He was renowned as the best trumpet/cornet in Chicago until Bix Beiderbecke entered the scene.

Muggsy led several traditional/"hot" jazz bands, most notably Muggsy Spanier and His Ragtime Band (which did not, in fact, play ragtime but, rather, "hot jazz" that would now be called Dixieland). This band set the style for all later attempts to play traditional jazz with a swing rhythm section. Its key members, apart from Muggsy, were: George Brunies - later Brunis - (trombone and vocals), Rod Cless (clarinet), George Zack or Joe Bushkin (piano), Ray McKinstry, Nick Ciazza or Bernie Billings (tenor sax), and Bob Casey (bass). A number of competent but unmemorable drummers worked in the band.

The Ragtime Band's theme tune was "Relaxin' at the Touro", named for Touro Infirmary, the New Orleans hospital where Muggsy had been treated for a perforated ulcer early in 1938. He had been at the point of death when he was saved by one Dr. Alton Ochsner who drained the fluid and eased Muggsy's weakened breathing.

"Relaxin' At The Touro" is a fairly straightforward 12-bar blues, with a neat piano introduction and coda by Joe Bushkin. The pianist recalled, many years later: "When I finally joined Muggsy in Chicago (having left Bunny Berigan's failing big band) we met to talk it over at the Three Deuces, where Art Tatum was appearing. Muggsy was now playing opposite Fats Waller at the Sherman hotel and we worked out a kind of stage show for the two bands. Muggsy was a man of great integrity. We played a blues in C and I made up a little intro. After that I was listed as the co-composer of "Relaxin' at the Touro" (quoted by Richard B. Hadlock in the notes to the Bluebird CD 'Muggsy Spanier 1939 - The "Ragtime Band" Sessions', 07863 66550).

In his time, Muggsy made numerous Dixieland recordings that still serve as favorites today. Apart from the famous Ragtime Band, his other most important ventures were the quartet he co-led with Sidney Bechet (the 'Big Four') in 1940 and the traditional band he co-led with pianist Earl Hines at the Club Hangover in San Francisco in the 1950s. During the early 1920s he played with The Bucktown Five in Chicago.

Although Muggsy's real name was Francis Joseph Julian Spanier, he acquired the nickname "Muggsy" either because of his youthful enthusiasm for a baseball hero ("Muggsy" McGraw), or because of his obsession with King Oliver and Louis Armstrong. He was known to have shadowed and "mugged" both of them, copying their styles and incorporating them into his own music. He was allowed, on at least one occasion, to sit in with King Oliver's band (with Louis Armstrong on second cornet) at the Lincoln Gardens, Chicago, in the early 1920s.

He ended his days in the 1960s, leading a traditional jazz band that included old friends like Joe Sullivan (piano), Pops Foster (bass) and Darnell Howard (clarinet). He was not a great technician or virtuoso, but he could lead a traditional ensemble with fire and guts. The (then) young pianist Joe Bushkin was in the Ragtime Band in 1939 and later said of Muggsy: "When he nailed something right, he stayed with it; he wouldn't fix it if it wasn't broke".

This article uses material from the article Muggsy Spanier from the free encyclopedia Wikipedia and it is licensed under the GNU Free Documentation License.