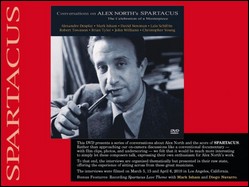 Alex North (born Isadore Soifer, December 4, 1910 – September 8, 1991) was an American composer best known for his many film scores, including A Streetcar Named Desire (one of the first jazz-based film scores), Viva Zapata!, Spartacus, Cleopatra, and Who's Afraid of Virginia Woolf?. He was the first composer to receive an Honorary Academy Award but never won a competitive Oscar despite fourteen nominations.

North managed to integrate his modernism into typical film music leitmotif structure, rich with themes. One of these became the famous song, "Unchained Melody". Nominated for fifteen Oscars but unsuccessful each time, North is one of only two film composers to receive the Lifetime Achievement Academy Award, the other being Ennio Morricone. North's frequent collaborator as orchestrator was the avant-garde composer Henry Brant. He won the 1968 Golden Globe award for his music to The Shoes of the Fisherman (1968).

His best-known film scores include A Streetcar Named Desire, Death of a Salesman, Viva Zapata!, The Rainmaker, Spartacus, The Misfits, Cleopatra, Who's Afraid of Virginia Woolf?, Dragonslayer and Under the Volcano. His music for The Wonderful Country makes use of Mexican and American motifs.

His commissioned score for 2001: A Space Odyssey is notorious for having been discarded by director Stanley Kubrick. Although North later incorporated motifs from the rejected score for The Shoes of the Fisherman, Shanks and Dragonslayer, the score itself remained unheard until composer Jerry Goldsmith rerecorded it for Varèse Sarabande in 1993. In 2007, Intrada Records released the 1968 recording sessions on CD from North's personal archives.

North was also commissioned to write a jazz score for Nero Wolfe, a 1959 CBS-TV series based on Rex Stout's Nero Wolfe characters, starring William Shatner as Archie Goodwin and Kurt Kasznar as Nero Wolfe.[2] A pilot and two or three episodes were filmed, but the designated time slot was, in the end, given to another series.[3][4] North's unheard score for Nero Wolfe and six recorded tracks on digital audio tape are in the UCLA Music Library Special Collections.[5] He also wrote the music for various other television shows, such as the anthologies Climax! and Playhouse 90.

Though North is best known for his work in Hollywood, he spent years in New York writing music for the stage; he composed the score, by turns plaintive and jarring, for the original Broadway production of Death of a Salesman. It was in New York that he met Elia Kazan (director of Salesman), who brought him to Hollywood in the '50s. North was one of several composers who brought the influence of contemporary concert music into film, in part marked by an increased use of dissonance and complex rhythms. But there is also a lyrical quality to much of his work which may be connected to the influence of Aaron Copland, with whom he studied.

In 2016, the Library of Congress added North's 1951 recording of his score to "A Streetcar Named Desire" to its National Recording Registry.

The American Film Institute ranked North's score for A Streetcar Named Desire #19 on their list of the greatest film scores. His scores for the following films were also nominated for the list:

This article uses material from the article Alex North from the free encyclopedia Wikipedia and it is licensed under the GNU Free Documentation License.