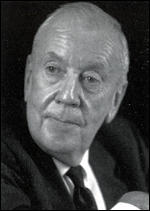 Sir Malcolm Henry Arnold, CBE (21 October 1921 – 23 September 2006) was an English composer. His output of works features music in many genres, including a cycle of nine symphonies, numerous concertos, concert works, chamber music, choral music and music for brass band and wind band. He wrote extensively for the theatre, with five ballets specially commissioned by the Royal Ballet, as well as two operas and a musical. He also produced scores for more than a hundred films, among these The Bridge on the River Kwai (1957), for which he won an Oscar.

Malcolm Arnold was born in Northampton, Northamptonshire, England, the youngest of five children from a prosperous Northampton family of shoemakers. Although shoemakers, his family was full of musicians; both of his parents were pianists, and his aunt was a violinist. After seeing Louis Armstrong play in Bournemouth, he took up the trumpet at the age of 12 and five years later won a scholarship to the Royal College of Music (R.C.M.).

At the RCM he studied composition with Gordon Jacob[1] and the trumpet with Ernest Hall. In 1941 he joined the London Philharmonic Orchestra[1] (LPO) as second trumpet and became principal trumpet in 1943.

In 1941 he registered as a conscientious objector, and was initially exempted from military service conditional upon joining the National Fire Service, but in the event he was allowed to continue in the LPO. In 1944, after his brother in the Royal Air Force had been killed, he volunteered for military service. When the army put him in a military band he shot himself in the foot to get back to civilian life; he remained in touch with the CO movement, giving a trumpet recital at the 1946 New Year party of the Central Board for Conscientious Objectors.[2] After a season as principal trumpet with the BBC Symphony Orchestra he returned in 1946 to the London Philharmonic, where he remained until 1948, leaving to become a full-time composer.[1]

Arnold began his career playing trumpet professionally, but by the age of 30 his life was devoted to composition. He was ranked with Benjamin Britten as one of the most sought-after composers in Britain.[3] His natural melodic gift earned him a reputation as a composer of light music in works such as some of his concert overtures and the sets of Welsh, English, Scottish, Irish and Cornish dances. He was also a highly successful composer of film music, penning the scores to over a hundred features and documentaries, including titles such as The Bridge on the River Kwai, Hobson's Choice and the St Trinian's series. His nine symphonies are often deeply personal and show a more serious side to his work, which has proved more controversial. Arnold also wrote a variety of concertos and chamber works, as well as music for the theatre including major ballets.

By 1961, Arnold had a reputation for being unpleasant, frequently drunk and highly promiscuous. He divorced his first wife in that year. His second wife was forced to take out a court order after they separated. After the divorce, he made two suicide attempts.[3]

His later years saw a decline in both health and finances. In 1978 he was treated as an in-patient for several months in the acute psychiatric ward at the Royal Free Hospital, Pond Street, London, and in 1979 he entered St Andrew's Hospital in his home town of Northampton to be treated for depression and alcoholism. He overcame both, despite being given only a year to live in the early 1980s. He lived for 22 more years, albeit with a carer, Anthony Day, and completed his 9th and final symphony in 1986. By the time of Arnold's 70th birthday celebrations in 1991, his artistic reputation with the general public was recovering and he was even able to enjoy a triumphant appearance on the stage of the Royal Albert Hall to receive an ovation after a Proms performance of his Guitar Concerto.[4]

Arnold died at the Norfolk and Norwich University Hospital, Norwich, on 23 September 2006 aged 84, after suffering from a chest infection. That same day his last work, The Three Musketeers, was premiered in a Northern Ballet production at the Bradford Alhambra. (The score included no new music by Arnold, but excerpts from various of his compositions were arranged by John Longstaff. The original score was compiled by Anthony Meredith.)

A dispute was fought out over the royalties of Arnold's 9th Symphony. Anthony Day was granted rights, having been left a substantial part of Arnold's estate.[5]

Arnold was a relatively conservative composer of tonal works, but a prolific and popular one. He acknowledged Hector Berlioz as an influence, alongside Gustav Mahler, Béla Bartók and jazz.[6] Several commentators have drawn a comparison with Jean Sibelius. Arnold's most significant works are generally considered to be his nine symphonies. He also wrote a number of concertos, including one for guitar for Julian Bream, one for cello for Julian Lloyd Webber, two for clarinet for Frederick Thurston and Benny Goodman respectively, one for harmonica for Larry Adler and one – enthusiastically welcomed at its premiere during the 1969 Proms – for three hands on two pianos for the husband-and-wife team of Cyril Smith and Phyllis Sellick. His sets of dances — comprising two sets of English Dances (Opp. 27 and 33), along with one set each of Scottish Dances (Op. 59), Cornish Dances (Op. 91), Irish Dances (Op. 126), and Welsh Dances (Op. 138) — are mainly in a lighter vein and are popular both in their original orchestral guise and in later wind and brass band arrangements. The English Dances also form the basis for Kenneth MacMillan's short ballet Solitaire, and one of them is used as the theme music for the British television programme What the Papers Say (the Cornish Dances provide the theme music for the television programmes of the cook Rick Stein). Arnold also wrote some highly successful concert overtures,[7] including Beckus the Dandipratt (an important stepping stone in his early career), the strikingly scored Tam o' Shanter (based on the famous Robert Burns poem), the rollicking A Grand Grand Overture (written for a Hoffnung Festival and featuring three vacuum cleaners and a floor polisher, all in turn polished off by a firing squad in uproarious mock 1812 manner), and the dramatic Peterloo Overture (commissioned by the Trades Union Congress to commemorate the historic massacre of protesting workers in Manchester). Another popular short work is his Divertimento for Flute, Oboe and Clarinet (Op. 37). Arnold is also known for his relatively large number of compositions and arrangements of his own compositions for brass band.

He was the President of the Rochdale Youth Orchestra until his death in September 2006. The Leicestershire Schools Symphony Orchestra made the first commercial recording of Arnold's Divertimento for the Pye label in July 1967 and regularly performed many of his works in the UK and abroad. Arnold also conducted the orchestra in a 1963 De Montfort Hall concert that included his own English Dances and Tam O'Shanter. Malcolm Arnold wrote the Trevelyan Suite to mark the opening of Trevelyan College, University of Durham. His daughter was among the first intake of students. He conducted the Royal Philharmonic Orchestra in the recording of Deep Purple's Concerto for Group and Orchestra and the London Symphony Orchestra in the Gemini Suite composed by the group's organist, Jon Lord. Since the 1980s there have been frequent concerts and festivals dedicated to his music. In October of each year there is an annual Malcolm Arnold Festival in his birthplace Northampton. On 3 September 2010 the Malcolm Arnold Academy, a secondary school in Northampton, was opened; while in September 2014 the new Malcolm Arnold Preparatory Free School was opened.

This article uses material from the article Malcolm Arnold from the free encyclopedia Wikipedia and it is licensed under the GNU Free Documentation License.