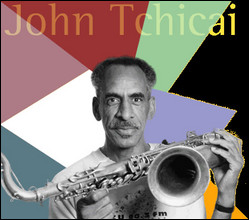 died on 8/10/2012 in Perpignan, Languedoc-Roussillon, France

Tchicai was born in Copenhagen to a Danish mother and a Congolese father.[2] The family moved to Aarhus, where he studied violin in his youth, and in his mid-teens began playing clarinet and alto saxophone, focusing on the latter.[3] By the late 1950s he was travelling around northern Europe, playing with many musicians.

Following his work in New York, Tchicai returned to Denmark in 1966, and shortly thereafter focused most of his time on music education. He formed the small orchestra Cadentia Nova Danica with Danish and other European musicians; this group collaborated with Musica Elettronica Viva and performed in multi-media events. In 1969, he took part in the recording of John Lennon's Unfinished Music No.2: Life with the Lions.

On August 30, 1975 his appearance at the Willisau Jazz Festival was recorded and released later that year as Willi The Pig. On this record, he plays with Swiss pianist Irène Schweizer. Tchicai returned to a regular gigging and recording schedule in the late 1970s. In the early 1980s he switched to the tenor saxophone as his primary instrument. In 1990 he was awarded a lifetime grant from the Danish Ministry of Culture.[3]

Tchicai and his wife relocated to Davis, California, in 1991, where he led several ensembles. He was awarded a National Endowment for the Arts fellowship in 1997. He was a member of Henry Kaiser and Wadada Leo Smith's "Yo Miles" band, a loose aggregation of musicians exploring Miles Davis' electric period.

Since 2001 he had been living near Perpignan in southern France. On June 11, 2012, he suffered a brain hemorrhage in an airport in Barcelona, Spain. He was recovering and had canceled all appearances when he died in a Perpignan hospital on 8 October 2012.[4]

This article uses material from the article John Tchicai from the free encyclopedia Wikipedia and it is licensed under the GNU Free Documentation License.