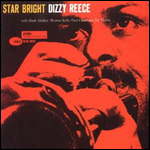 Reece was born on 5 January 1931 in Kingston, Jamaica, the son of a silent film pianist. He attended the Alpha Boys School (famed in Jamaica for its musical alumni), switching from baritone to trumpet when he was 14 years old. A full-time musician from the age of 16, he moved to London in 1948 and spent the 1950s working in Europe, much of that time in Paris. He played with Don Byas, Kenny Clarke, Frank Foster and Thad Jones, among others.

Reece wrote the music for the 1958 Ealing Studios film Nowhere to Go.

This article uses material from the article Dizzy Reece from the free encyclopedia Wikipedia and it is licensed under the GNU Free Documentation License.