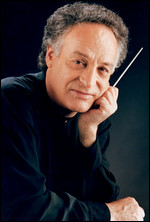 Yoav Talmi was born in Kibbutz Merhavia He studied composition and orchestral direction first in Israel, at the Rubin Academy of Music in Tel Aviv, and then in the United States, at the Juilliard School. In 1966, he was awarded the Koussevitzky Conducting Prize at the Tanglewood Music Center. In 1973, he won the Rupert Foundation Conducting Competition in London.

Yoav Talmi and his wife Er'ella have two children.[1] In 2001, the Université Laval awarded him an honorary doctorate. In 2009, he was made an Officer of the National Order of Quebec.[2]

Talmi's compositions include the official march of the Israeli Army, Tsahal Tso'ed, an Elegy for Strings, Timpani and Accordion ("Dachau Reflections").[1] His composition "De Profundis for Choir and Orchestra" premiered in Quebec City in May 2011.

This article uses material from the article Yoav Talmi from the free encyclopedia Wikipedia and it is licensed under the GNU Free Documentation License.