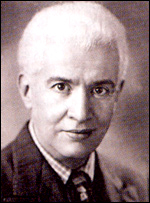 Manuel María Ponce Cuéllar (8 December 1882 24 April 1948) was a Mexican composer active in the 20th century. His work as a composer, music educator and scholar of Mexican music connected the concert scene with a usually forgotten tradition of popular song and Mexican folklore. Many of his compositions are strongly influenced by the harmonies and form of traditional songs.

Born in Fresnillo, Zacatecas, Manuel Maria Ponce moved with his family to the city of Aguascalientes only a few weeks after his birth and lived there until he was 15 years old.

He was famous for being a musical prodigy; according to his biographers, he was barely four years of age when, after having listened to the piano classes received by his sister, Josefina, he sat in front of the instrument and interpreted one of the pieces that he had heard. Immediately, his parents had him receive classes in piano and musical notation.

In 1901 Ponce entered the National Conservatory of Music, already with a certain prestige as a pianist and composer. There he remained until 1903, the year in which he returned to the city of Aguascalientes. This was only the beginning of his travels. In 1904 he traveled to Italy for advanced musical studies at the School of Bologna.

He studied in Germany as a pupil of Martin Krause at the Stern conservatory in Berlin between 1906 and 1908.

Years at the National Conservatory

In 1912 he composed his most famous work "Estrellita" (little star), which is not a normal love song, as is usually thought, but "Nostalgia Viva" (live nostalgia).

That same year, Ponce gave in the "Arbeau Theater" a memorable concert of Mexican popular music which, though it scandalized ardent defenders of European classical music, became a landmark in the history of the national song.

With valuable activity promoting music of the country and writing melodías like "Estrellita", "A la orilla de un palmar", "Alevántate", "La Pajarera", "Marchita el Alma" and "Una Multitud Más", Ponce gained the honorific title Creator of the Modern Mexican Song. He was also the first Mexican composer to project popular music onto the world stage: "Estrellita", for example, has been part of the repertoire of the main orchestras of the world and countless singers, although quite often the interpreter ignores the origin of the song as well as its author.

In 1947 he received the National Science and Arts Prize.

He was married to Clementina Maurel, next to whom he died in Mexico City. His body was buried in the Roundhouse of the Illustrious Men in the Pantheon of Dolores in Mexico City. In his honor there is a board of recognition by the state of Aguascalientes at the base of the column of The Exedra, next to the fountain from a spring dedicated to this musical poet, in the city of Aguascalientes where he grew up and first studied music.

Ponce participated in the following recordings:

Ponce wrote music for solo instruments, chamber ensembles, and orchestra. His piano and guitar works outnumber those dedicated to other solo instruments within the set of pieces we know. Estrellita is Ponce's best known work.

Ponce's guitar music is a core part of the instrument's repertory, the best-known works being Variations and Fugue on 'La Folia' (1929) and Sonatina meridional (1939). He also wrote a guitar concerto Concierto del sur, which is dedicated to his long-time friend and guitar virtuoso Andrés Segovia. His last known work dedicated to Father Antonio Brambila, Variations on a Theme of Cabezón, was written in 1948, a few months before his death. It is unclear whether the variations are indeed based upon a theme by Antonio de Cabezón or if the theme was the work of Ponce's teacher, the organist Enrico Bossi. The following is only a select number of his most 'significant' contributions.

It was Ponce who anonymously created the striking arrangement for guitar of J. S. Bach's Prelude from the first cello suite as performed and recorded by Segovia. Ponce also composed the prelude for lute ascribed by Segovia on record and program notes to lutenist/Bach contemporary S. L. Weiss. Segovia recorded this piece both as a solo and as a duet, performed with harpsichordist Rafael Puyana. Check with Christopher Parkening for verification.

According to some mythogical oral testimonies and contemporary press, the composer was himself an extremely developed piano performer.

Notes about the works

An important group of Ponce's works were previously unknown to the public, as self-proclaimed heir Carlos Vázquez, a Mexican piano performer and educator who studied with Ponce, kept most of the original manuscripts in his possession. Most of them were finally donated to the National School of Music (UNAM) in Mexico City, as an analytic catalogue of his works could still be published.

One of Ponce's melodies still heard today in various arrangements is "Estrellita" (1912).

This article uses material from the article Manuel Ponce (composer) from the free encyclopedia Wikipedia and it is licensed under the GNU Free Documentation License.

Johann Nepomuk Hummel Air à la Tirolienne avec variations
Update Required To play the media you will need to either update your browser to a recent version or update your Flash plugin.