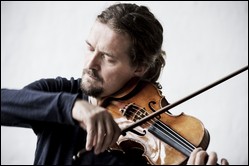 Tetzlaff was born in Hamburg. His parents were amateur musicians and met in a church choir.[1] He began playing the violin and piano at the age of 6, and made his concert debut at 14 years old. He studied with Uwe-Martin Haiberg at the Musikhochschule Lübeck and later with Walter Levin at the University of Cincinnati – College-Conservatory of Music.

His breakthrough as a soloist came in 1988, at the age of 22, when he performed Schoenberg's Violin Concerto in critically acclaimed concerts with the Cleveland Orchestra and the Munich Philharmonic.[1] The following year he made his solo recital debut in New York.[2] He has continued to play as a soloist with major orchestras on stage and in recordings, including Beethoven's works for violin and orchestra performed with the Tonhalle Orchester Zürich under David Zinman. He joined his sister Tanja (cello) and Leif Ove Andsnes (piano) in winning the 2012 Gramophone Award for best chamber recording (playing Schumann's piano trios).[3] His recording of Schumann's violin sonatas with Lars Vogt (piano) was named Gramophone's recording of the month for January 2014.[4] Other critically acclaimed recordings include his 2007 release of Bach's sonatas and partitas for solo violin,[5] and his 2012 release of three Mozart violin sonatas with Lars Vogt.[6] His discography includes a number of modern works such as the violin concertos of György Ligeti and Stuart MacRae.[7]

In 2011 he signed a long-term recording contract with Ondine.[8]

Tetzlaff plays a contemporary violin by Stefan-Peter Greiner which he has had since 2002, preferring it to his previous Stradivarius instrument. He uses a Peccatte bow, and Vision strings by Thomastik-Infeld in Vienna.[9] He eschews routinely playing the violin with the full, lyrical sound preferred by many of his contemporaries, telling The New Yorker: "The listener loses the ear for the most beautiful sounds if they've been used for arbitrary, non-important things".[1] This approach has occasionally left Tetzlaff open to criticism. The Guardian's critic Andrew Clements argued that his recording of the Schumann piano trios, mentioned above, lacked "any sense of involvement or affection for the music", and that his 2014 release of Shostakovich's violin concertos was sometimes devoid of "character".[1][10]

Tetzlaff suffers from neurodermatitis in his left hand, which can cause extreme pain when the hand's fingers are applied to the strings of a violin. Over the years he has managed the condition in a variety of ways, including by using cotton thimbles to cover his fingers, and more recently by increasing his blood circulation by exercising before performances.[1]

This article uses material from the article Christian Tetzlaff from the free encyclopedia Wikipedia and it is licensed under the GNU Free Documentation License.

Wolfgang Amadeus Mozart Deh per questo istante solo aus der Oper La clemenza di Tito
Update Required To play the media you will need to either update your browser to a recent version or update your Flash plugin.