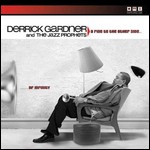 Not to be confused with Earl Gardner (musician).

Gardner began playing trumpet at the age of 9 in his hometown of Chicago, IL. Throughout high school and college, he was recognized by instructors as having strong improvisational skills and a marvelous imagination. In 1991, he moved to New York City and quickly began to make his mark on the local jazz scene, playing ith groups such as the Count Basie Orchestra, Frank Foster's Loud Minority Band, Harry Connick, Jr.'s Big Band, Roman Schwaller's European Sextet, and The Smithsonian Jazz Masterworks Orchestra.

Critics have described him as "having a way of moving past the notes in a solo and getting into formal realms that make sense and heighten interest."[2] Another critic describes him as "Soulful and Intelligent, a tremendous talent with a vivid and unusual imagination."[3]

As a composer and arranger, Gardner's music has been featured with The Count Basie Orchestra.[4]

Since 1989, Derrick has written for and led his own sextet, Derrick Gardner & the Jazz Prophets.[5] In 2008, Gardner signed the group to Indianapolis jazz label Owl Studios and has since released two albums on the label, 2008's A Ride to the Other Side, and 2009's Echoes of Ethnicity, which was the winner of the Best Jazz Album award at the 9th Annual Independent Music Awards "Echoes of Ethnicity"[6]

As of July 2011, Gardner is associate professor of trumpet in the University of Manitoba's Jazz Studies program.[7]

This article uses material from the article Derrick Gardner from the free encyclopedia Wikipedia and it is licensed under the GNU Free Documentation License.