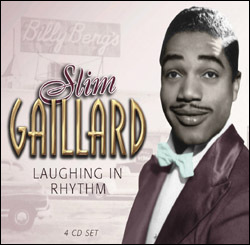 Gaillard was noted for his comedic vocalese singing and word play in his own constructed language called "Vout-O-Reenee", for which he wrote a dictionary. He spoke five other languages (Spanish, German, Greek, Arabic, Armenian,) with varying degrees of fluency.[1]:676

He rose to prominence in the late 1930s with hits such as "Flat Foot Floogie (with a Floy Floy)" and "Cement Mixer (Put-Ti-Put-Ti)" after forming Slim and Slam with Leroy Eliot "Slam" Stewart. During World War II, Gaillard served as a bomber pilot in the Pacific. In 1944, he resumed his music career and performed with notable jazz musicians such as Charlie Parker, Dizzy Gillespie, and Dodo Marmarosa.

In the 1960s and 1970s, he acted in films—sometimes as himself—and also appeared in bit parts in television series such as Roots: The Next Generations.

In the 1980s, Gaillard resumed touring the circuit of European jazz festivals. He followed Dizzy Gillespie's advice to move to Europe and, in 1983, settled in London, where he died on 26 February 1991, after a long career in music, film and television, spanning nearly six decades.[1]:679

Along with Gaillard's date of birth, his lineage and place of birth are disputed. Many sources state that he was born in Detroit, Michigan, though he said that he was born in Santa Clara, Cuba.[2]:934 of an Afro-Cuban mother called Maria (Mary Gaillard[3]) and a German-Jewish father called Theophilus (Theophilus Rothschild[3]) who worked as a ship's steward.[1]:674 During an interview in 1989, Gaillard added: "They all think I was born in Detroit because that was the first place I got into when I got to America." However, the 1920 census lists one "Beuler Gillard" [sic] as living in Pensacola, Florida, having been born in April, 1918 in Alabama. Researchers Bob Eagle and Eric LeBlanc have concluded that he was born in June 1918 in Claiborne, Alabama, [4] where a "Theophilus Rothchild" [sic] had been raised the son of a successful merchant in the small town of Burnt Corn; other documents give his name as Wilson, Bulee, or Beuler Gillard or Gaillard.[4] According to obituaries in newspapers, Gaillard's putative childhood in Cuba was spent cutting sugar-cane and picking bananas, as well as occasionally going to sea with his father.

At the age of twelve, he accompanied his father on a world voyage and was accidentally left behind on the island of Crete.[1]:674[5][6] On a television documentary in 1989, he said, "When I was stranded in Crete, I was only twelve years old. I stayed there for four years. I traveled on the boats to Beirut and Syria and I learned to speak the language and the people's way of life."[7] After learning a few words of Greek, he worked on the island "making shoes and hats".[1]:674 He then joined a ship working the eastern Mediterranean ports, mainly Beirut, where he picked up some knowledge of Arabic.[1]:674 When he was about 15, he re-crossed the Atlantic, hoping the ship would take him home to Cuba, but it was bound for the U.S. and he ended up in Detroit. He never saw either of his parents again.[1]:674

Alone and unable to speak English, he tried to get a job at Ford Motor Company but was rejected because of his age.[7] He worked at a general store owned by an Armenian family, with whom he lived for some time, then tried to become a boxer. During Prohibition in 1931 or 1932, he drove a hearse with a coffin that was packed with whiskey for the Purple Gang.[1]:675 He attended evening classes in music and taught himself to play guitar and piano.[1]:675 When Duke Ellington came to Detroit, he went backstage and met his hero. Determined to become a musical entertainer, he moved to New York City and entered the world of show business as a 'professional amateur'.[1]:675 As Gaillard recalled much later:

The MC would say, "Here they come, all the hopefuls!" Well, we may have been hopefuls but we weren't amateurs. Of course, you had to be a little bad in spots. If you were too good you'd lose the amateur image. I would be a tap dancer this week, next week I'd play guitar, two weeks later some boogie-woogie piano. They paid us $16 a show. I did one with Frank Sinatra I got $16 and he got $16. Every time I see him I say, "Got a raise yet, Frank?"
—Tony Russell, Jazz Greats, Issue #57.[1]:675

Gaillard first rose to prominence in the late 1930s as part of Slim & Slam, a jazz novelty act he formed with bassist Slam Stewart.[8]:2[6][5]Their hits included "Flat Foot Floogie (with a Floy Floy)", "Cement Mixer (Put-Ti-Put-Ti)" and the hipster anthem, "The Groove Juice Special (Opera in Vout)". The duo performs in the 1941 movie Hellzapoppin'.

Gaillard's appeal was similar to Cab Calloway's and Louis Jordan's in that he presented a hip style with broad appeal (for example in his children's song "Down by the Station"). Unlike them, he was a master improviser whose stream of consciousness vocals ranged far from the original lyrics. He sang wild interpolations of nonsense syllables, such as "MacVoutie O-reeney". One such performance is celebrated in the 1957 novel On the Road by Jack Kerouac.[9] Gaillard, with Dodo Marmarosa on piano, appeared as a guest several times on Command Performance, recorded at KNX radio studios in Hollywood in the 1940s and distributed on transcription discs to American troops in World War II.

In 1943,[10]:4 Gaillard was drafted in the United States Army Air Forces and "qualified as a pilot flying [...] B-26 bombers in the Pacific"[11] and resumed his music career on his release from the draft in 1944.[12] Gaillard later teamed with bassist Bam Brown. They can be seen in a 1947 motion picture featurette O'Voutie O'Rooney filmed live at one of their nightclub performances.[13][14]

In the late 1940s and early 1950s, Gaillard frequently opened at Birdland for Charlie Parker, Flip Phillips, and Coleman Hawkins. His December 1945 session with Parker and Dizzy Gillespie is notable, both musically and for its relaxed convivial air. "Slim's Jam", from that session, is one of the earliest known recordings of Parker's speaking voice.[15] Gaillard could play several instruments and managed to turn the performance from jazz to comedy. He would play the guitar with his left hand fretting from the top of the neck, or would play credible piano solos with his palms facing up. Gaillard wrote the theme song to the Peter Potter radio show. In addition, in 1950 he wrote and recorded the "Don Pitts On the Air" theme for San Francisco DJ Don Pitts. On March 27, 2008 the Pitts theme song entered the archives of the Rock and Roll Hall of Fame in Cleveland, Ohio.

Gaillard appeared in several shows in the 1960s and 1970s, such as Marcus Welby, M.D., Charlie's Angels, Mission: Impossible, Medical Center, The Flip Wilson Show, and Then Came Bronson. He also appeared in the 1970s TV series Roots: The Next Generations and reprised some of his old hits on the NBC prime-time variety program, The Chuck Barris Rah Rah Show.

By the early 1980s Gaillard was touring the European jazz festival circuit, playing with such musicians as Arnett Cobb. He also played with George Melly and John Chilton's Feetwarmers, appearing on their BBC television series and also occasionally deputising for Melly when he was unwell. Gaillard's behavior on stage was often erratic and nerve-wracking for the accompanying musicians. He made a guest appearance on Show 106 of the 1980s music program Night Music, an NBC late-night music series hosted by David Sanborn.

I was introduced as Cuban. "Rooney! I am Cuban too." [...] Slim said how much he wanted to make a Latin record and talked about his friend the great Cuban leader Machito. This was 1985. I had been flying between Angola, where Cuban troops were fighting and Miami where one million exiled Cubans live. We talked of all those Cubans who wanted to go back to Cuba but couldn't. [...] In his inimitable, enthusiastic way Slim was trying to sell me, a movie maker, the idea of recording an album.
—Joe Massot, Siboney.[11]

In 1986, Gaillard appeared in the musical film Absolute Beginners, singing "Selling Out". In the autumn of 1989, the BBC aired director Anthony Wall's four-part documentary on Gaillard entitled Slim Gaillard's Civilisation.

Gaillard used Yiddish in at least two of his songs, "Dunkin' Bagels", and "Matzo Balls", where he refers to numerous Jewish ethnic dishes eaten by Ashkenazi Jews.[16][17] The songs were issued by the Slim Gaillard Quartet in 1945 on the Melodisc label, featuring Gaillard on guitar, Zutty Singleton on drums, "Tiny" Brown on bass and Dodo Marmarosa on piano. "Dunkin Bagels" was later included in the 2010 compilation CD Black Sabbath: The Secret Musical History of Black-Jewish Relations, issued by the Idelsohn Society for Musical Preservation.[18] "Matzo Balls" is played on the radio by John Goodman's character ("Al Yackey") in the 1989 Steven Spielberg film Always.

He has also made a cover version of a Greek folk song called "Tee say malee" ("Why Do You Care"). Arabic is also used in some of Gaillard's songs, for example "Yep-Roc-Heresay" and "Arabian Boogie". Irish is present in the name O'Voutie O'Rooney, the title of his 1947 movie and reminiscent of Vout-o-Reenee, the name he used for his invented language. The name invokes at least one Irish surname, O'Rooney, which means "Son of Secrets/Mystery." The root of Rooney is "rún" the Irish word for "mystery" and is related to the word "rune," an old European writing system.

This article uses material from the article Slim Gaillard from the free encyclopedia Wikipedia and it is licensed under the GNU Free Documentation License.