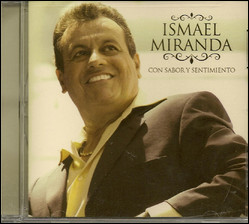 Ismael Miranda a.k.a. "El niño bonito de la Salsa" (The pretty boy of Salsa) (born February 20, 1950) is a composer and a singer of salsa music.

Miranda (birth name: Ismael Miranda Carrero [note 1]) was born in Aguada, Puerto Rico and grew up in New York City on East 13th Street in Manhattan's East Village. He wanted to become a musician as a child. His musical inclination led him to form two different juvenile groups, "The 4J's and Little Junior" and "The Class Mates" by the time he was eleven years old. He sang and played conga for the group and they were good enough to appear on Jerry Lewis' Muscular Dystrophy Telethon. Miranda also grew up and played in his first bands with Jazz percussionist Orlando "Q" Rodríguez and piano player Mark Diamond.[1]

In 1967, when Miranda was 17 years old, he made his recording debut with the song "Let's Ball" with Joey Pastrana and had his first "hit" with "Rumbón Melón". He created such a good impression on bandleader Larry Harlow, that he was hired as Larry's lead singer. That same year Miranda and Harlow co-authored "El Exigente" ("The Demanding One"), set to the rhythm of the Latin Boogaloo craze of the time.[1]

The Fania All Stars

In 1969, Miranda joined the Fania All Stars and went with this band on tour to Europe, Asia and Latin America. In 1973, he formed his own band called "Orquesta Revelación" and recorded "Así se compone un son" under the Fania record label. With this song, Miranda entered the new salsa craze which was sweeping the nation. He was then baptized as "El Niño Bonito de la Salsa" ( 'The Pretty Boy of Salsa"). During the 1970s, he continued to have more hits with songs like "Lupe, Lupe", "Señor Sereno" and many others.[2]

In 1984, Miranda recorded an album for Fania with the famed Cuban conjunto Sonora Matancera. By 1988, he had planned to retire. However, he went on to establish his own record label "IM Records" and recorded several boleros with Andy Montañez.[2] By 1992, he signed under the management of Chino Rodríguez in New York City, who negotiated with the late Jerry Masucci on the Fania All-Star Reunion of 1994.

The 2002 recording of one of Miranda's concerts received the recognition and acclaim of the National Foundation of Popular Culture of Puerto Rico. He also recorded a well-received CD, which contained songs composed by the renowned Mexican composer José Alfredo Jiménez in the salsa version.[1]

On September 27, 2003, Ismael Miranda performed at the famed Copacabana nightclub in New York City. He currently continues to perform and is now on a national tour.[2]

This article uses material from the article Ismael Miranda from the free encyclopedia Wikipedia and it is licensed under the GNU Free Documentation License.