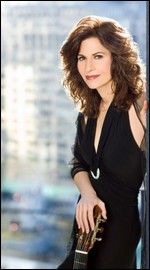 Sharon Isbin is an American classical guitarist and the founding director of the Guitar Department at Juilliard.

Sharon Isbin was born in Minneapolis, Minnesota, the daughter of Katherine Isbin[1] and Herbert S. Isbin, a nuclear scientist and professor at the University of Minnesota and author of Introductory Nuclear Reactor Theory (1963).[2] She began her guitar studies at age nine with Aldo Minella in Varese, Italy, where her father had been hired as a consultant.[3] She later studied with Jeffrey Van, Sophocles Papas, Andrés Segovia, Oscar Ghiglia, Alirio Díaz, and for ten years with the noted keyboard artist and Bach scholar Rosalyn Tureck. Isbin collaborated with Tureck in preparing and recording landmark first performance editions of the Bach lute suites for guitar.[4]

In 1995 Isbin came out as a lesbian in a profile by Out magazine. She wanted to come out a year earlier but her manager told her not to, only changing their mind after k.d. lang and Melissa Etheridge found success as out musicians the following year.[6]

In 2015, she performed with Josh Groban on the Billy Joel: Gershwin Prize concert broadcast nationally on PBS, and in February 2015 she was featured on the Tavis Smiley PBS television series.

Isbin gave the world premiere of Blossom Suite, composed by and performed with rock guitarist Steve Vai during a week of concerts she performed at the Theatre du Chatelet in Paris in 2005. Her earliest crossover collaborations began with Brazilian guitarist Laurindo Almeida and jazz guitarist Larry Coryell with whom she recorded and performed for five years. In 2014, she performed a 20-city Guitar Passions tour with jazz musicians Stanley Jordan and Romero Lubambo.

Other composers who have written for her include Joan Tower, David Diamond, Ned Rorem, Howard Shore, John Duarte, Leo Brouwer, Bruce MacCombie, and Richard Danielpour who was commissioned to write a song cycle for her and mezzo-soprano Isabel Leonard by New York's Carnegie Hall for their 125th anniversary and by Chicago's Harris Theater.[8]

Boston magazine called Isbin "the pre-eminent guitarist of our time".[9] She is the winner of Guitar Player magazine's Best Classical Guitarist award, First Prize winner of the Toronto Guitar '75 competition, a winner of the Madrid Queen Sofia, the first guitarist to win the Munich ARD International Competition, the winner of Concert Artists Guild 2013 Virtuoso Award and Germany's Echo Klassik Award.[10]

She won the 2010 Grammy Award for Best Instrumental Soloist for her CD Journey to the New World (Sony), which includes guests Joan Baez and Mark O'Connor, and she was the only classical artist to perform at the Grammys that year. Ranked as a no. 1 bestselling classical CD on Amazon.com and iTunes, it spent 63 consecutive weeks on the top of the Billboard charts.

She won a Grammy in 2001 for Dreams of a World: Folk-Inspired Music for Guitar (Warner Classics) for "Best Instrumental Soloist", becoming the first classical guitarist to win a Grammy in 28 years.

Her world premiere recording of concertos written for her by Christopher Rouse and Tan Dun won another Grammy in 2002, and she won Germany's prestigious Echo Klassik Award for "Best Concert Recording".

She received a 2005 Latin Grammy nomination for "Best Classical Album" and a 2006 GLAAD Media Award nomination for "Outstanding Music Artist" for her disc with the New York Philharmonic of Joaquín Rodrigo's Concierto de Aranjuez and concertos by Mexican composer Manuel Ponce and Brazilian Heitor Villa-Lobos. This is the Philharmonic's first-ever recording with guitar, and follows their Avery Fisher Hall performances in June 2004 with Sharon Isbin as their first guitar soloist in 26 years.

In November 1995, her CD American Landscapes and her Soloette Travel Guitar was launched in the space shuttle Atlantis and presented to Russian cosmonauts during a rendezvous with Mir.

On September 11, 2002, Isbin's performance for the memorial tribute at Ground Zero was televised live throughout the world. Isbin features on the soundtrack of Martin Scorsese's The Departed, which won four Academy Awards in 2007, including Best Picture, and on the Grammy nominated score soundtrack CD composed by Howard Shore.

In November 2009, she performed a concert at the White House by invitation of President Obama and the First Lady.

An internationally acclaimed one-hour documentary on her titled Sharon Isbin: Troubadour, produced by Susan Dangel and presented by American Public Television, has been broadcast on over 200 public television stations throughout the United States since November 2014, and is the winner of the 2015 ASCAP Television Broadcast Award.[11][12][13]

Teaching and other work

In 1989, she created the Master of Music degree, Graduate Diploma and Artist Diploma for classical guitar at the Juilliard School, making history by becoming their first guitar faculty and the founding director of the guitar department; she added the Bachelor of Music degree and Undergraduate Diploma to the program in 2007, and the Doctor of Musical Arts in 2018.[14]

Isbin is the author of the Classical Guitar Answer Book, and is director of the Guitar Department at the Aspen Music Festival.[15]

This article uses material from the article Sharon Isbin from the free encyclopedia Wikipedia and it is licensed under the GNU Free Documentation License.