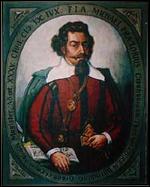 born in 1572 in Creuzburg an der Werra, Thüringen, Germany

died on 15/2/1621 in Wolfenbüttel, Niedersachsen, Germany

Michael Praetorius (probably 15 February 1571 – 15 February 1621) was a German composer, organist, and music theorist.[1] He was one of the most versatile composers of his age, being particularly significant in the development of musical forms based on Protestant hymns, many of which reflect an effort to improve the relationship between Protestants and Catholics.

Praetorius was born Michael Schultze, Schultheis, or Schultz, the youngest son of a Lutheran pastor, in Creuzburg, in present-day Thuringia. After attending school in Torgau and Zerbst, he studied divinity and philosophy at the University of Frankfurt (Oder). He was fluent in a number of languages. After receiving his musical education, from 1587 he served as organist at the Marienkirche in Frankfurt. From 1592/3 he served at the court in Wolfenbüttel, under the employ of Henry Julius, Duke of Brunswick-Lüneburg. He served in the duke's State Orchestra, first as organist and later (from 1604) as Kapellmeister.[2]

His first compositions appeared around 1602/3. Their publication primarily reflects the care for music at the court of Gröningen. The motets of this collection were the first in Germany to make use of the new Italian performance practices; as a result, they established him as a proficient composer.

These "modern" pieces mark the end of his middle creative period. The nine parts of his Musae Sioniae (1605–10) and the 1611 published collections of liturgical music (masses, hymns, magnificats) follow the German Protestant chorale style. With these, at the behest of a circle of orthodox Lutherans, he followed the Duchess Elizabeth, who ruled the duchy in the duke's absence. In place of popular music, Praetorius was now expected to produce religious music.

When the duke died in 1613 and was succeeded by Frederick Ulrich, Praetorius retained his employment. From 1613 he also worked at the court of John George I, Elector of Saxony at Dresden, where he was responsible for festive music. He was exposed to the latest Italian music, including the polychoral works of the Venetian School.[3] His subsequent development of the form of the chorale concerto, particularly the polychoral variety, resulted directly from his familiarity with the music of such Venetians as Giovanni Gabrieli. The solo-voice, polychoral, and instrumental compositions Praetorius prepared for these events mark the high period of his artistic creativity. Until his death, Praetorius stayed at the court in Dresden, where he was declared Kapellmeister von Haus aus and worked with Heinrich Schütz.

Michael Praetorius is said to have died on his 50th birthday, in Wolfenbüttel, Germany[2] and is entombed in a vault beneath the organ of the Marienkirche there.

His family name in German appears in various forms including Schultze, Schulte, Schultheiss, Schulz and Schulteis. Praetorius was the conventional Latinized form of this family name,[2] Schultze meaning "mayor" in German, and a Praetor was a Roman official.

Praetorius was a prolific composer; his compositions show the influence of Italian composers and his younger contemporary Heinrich Schütz. His works include the nine volume Musae Sioniae (1605–10), a collection of more than twelve hundred (ca. 1244) chorale and song arrangements; volume eleven of twenty is called Missodia Sionia and contains sacred music in Latin for church services for two to eight voices. He wrote many other works for the Lutheran church; and Terpsichore, a compendium of more than 300 instrumental dances, which is both his most widely known work, and his sole surviving secular work.

Many of Praetorius' choral compositions were scored for several mini-choirs situated in several locations in the church for multi-phonic effect.[4]

The familiar harmonization of Es ist ein Ros entsprungen (Lo, How a Rose E'er Blooming) was written by Praetorius in 1609.[5]

Praetorius was the greatest musical academic of his day and the Germanic writer of music best known to other 17th-century musicians.[6] Although his original theoretical contributions were relatively few, with nowhere near the long-range impact of other 17th-century German writers, like Johannes Lippius, Christoph Bernhard or Joachim Burmeister, he compiled an encyclopedic record of contemporary musical practices. While Praetorius made some refinements to figured-bass practice[7] and to tuning practice, his importance to scholars of the 17th century derives from his discussions of the normal use of instruments and voices in ensembles, the standard pitch of the time, and the state of modal, metrical, and fugal theory. His meticulous documentation of 17th-century practice was of inestimable value to the early-music revival of the 20th century.

His expansive but unfinshed treatise, Syntagma Musicum, appeared in three volumes (with appendix) between 1614 and 1620.[8] The first volume (1614), titled Musicae Artis Analecta, was written mostly in Latin, and regarded the music of the ancients and of the church. The second (De Organographia, 1618) regarded the musical instruments of the day, especially the organ; it was one of the first theoretical treatises written in the vernacular.[9] The third (Termini Musicali, 1618), also in German, regarded the genres of composition and the technical essentials for professional musicians. An appendix to the second volume (Theatrum Instrumentorum seu Sciagraphia, 1620) consisted of 42 beautifully drawn woodcuts, depicting instruments of the early 17th century, all grouped in families and shown to scale. A fourth volume on composition was planned, with the help of Baryphonus, but was left incomplete at his death. Gustave Reese said that the Syntagma Musicum was one of the most important sources of seventeenth century musical history.[3]

Praetorius wrote in a florid style, replete with long asides, polemics, and word-puzzles – all typical of 17th-century scholarly prose. As a lifelong committed Christian, he often regretted not taking holy orders but did write several theological tracts, which are now lost. As a Lutheran from a militantly Protestant family, he contributed greatly to the development of the vernacular liturgy, but also favored Italian compositional methods, performance practice and figured-bass notation.

This article uses material from the article Michael Praetorius from the free encyclopedia Wikipedia and it is licensed under the GNU Free Documentation License.