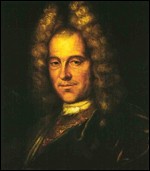 born in 1660 in Hirtenfeld, Austria

Johann Joseph Fux (German pronunciation: [fks]) (1660 13 February 1741) was an Austrian composer, music theorist and pedagogue of the late Baroque era. He is most famous as the author of Gradus ad Parnassum, a treatise on counterpoint, which has become the single most influential book on the Palestrina style of Renaissance polyphony. Almost all modern courses on Renaissance counterpoint, a mainstay of college music curricula, are indebted in some degree to this work by Fux.

Fux was born to a peasant family in Hirtenfeld in Styria. Relatively little is known about his early life, but likely he went to nearby Graz for music lessons. In 1680 he was accepted at the Jesuit university there, where his musical talent became apparent. From 1685 until 1688 he served as organist at St. Moritz in Ingolstadt. Sometime during this period he must have made a trip to Italy, as evidenced by the strong influence of Corelli and Bolognese composers on his work of the time.

By the 1690s he was in Vienna, and attracted the attention of Emperor Leopold I with some masses he composed; the emperor was sufficiently impressed by them to assist him with his career after this point. In 1698, Leopold hired him as court composer. Fux traveled again to Italy, studying in Rome in 1700; it may have been here that acquired the veneration for Palestrina which was so consequential for music pedagogy.

Fux served Leopold I until his death, and two more Habsburg emperors after that: Joseph I, and Charles VI, both of whom continued to employ him in high positions in the court. He was famous as a composer throughout this period, his fame being eclipsed only later in the 18th century as the Baroque style died. Although his music until recently never regained favor, his mastery of counterpoint influenced countless composers through his treatise Gradus ad Parnassum (1725). Haydn largely taught himself counterpoint by reading it and recommended it to the young Beethoven. Mozart had a copy of it that he annotated. The Baroque age in music in Austria ends with Fux.

The Gradus Ad Parnassum (Step or Ascent to Mount Parnassus) is a theoretical and pedagogical work written in Latin language, which Fux dedicated to Emperor Charles VI in 1725.

It is divided in two major parts. In the first part, Fux presents a summary of the theory on Musica Speculativa, or the analysis of intervals as proportions between numbers. This section is in a simple lecture style, and looks at music from a purely mathematical angle, in a theoretical tradition that goes back, through the works of Renaissance theoreticians, to the Ancient Greeks. The words of Mersenne, Cicero and Aristotle are among the references quoted by Fux in this section.

The second part, on Musica Pratica, is the section of this treatise where the author presents his instruction on counterpoint, fugue, double counterpoint, a brief essay on musical taste, and his ideas on composing Sacred music, writing in the Style A Cappella and in the Recitativo Style. This part is in the form of a dialog, between a master (Aloysius, Latin for Luigi, who is meant to represent Palestrina's ideas) and a student, Josephus, who represents Fux himself, a self-admitted admirer of Palestrina. At the outset, Fux states his purpose: "to invent a simple method by which a student can progress, step by step, to the heights of compositional mastery..." and gives his opinion of contemporary practice: "I will not be deterred by the most passionate haters of study, nor by the depravity of the present time." He also states that theory without practice is useless. Thus, his book stresses practice over theory.

While Gradus ad Parnassum is famous as the origin of the term "species counterpoint", Fux was not the first one to invent the idea. In 1610, Girolamo Diruta, a composer of the Venetian school, published Il Transilvano, which presented the Renaissance polyphonic style as a series of types: one note against one note, two notes against one note, suspensions, and so forth. Fux's work repeated some of Diruta's, possibly coincidentally, since he is not known to have had a copy. In any event, Fux presented the idea with a clarity and focus which made it famous as a teaching method.

Even though Fux made a number of errors, particularly in his description of third species (four notes against one) in which he allowed for idioms that do not belong to the 16th century, but rather to the 18th, modern counterpoint education is greatly indebted to Gradus ad Parnassum as the codex of the five species . Most subsequent counterpoint textbooks have taken Fux as their starting point, from the book by Albrechtsberger (Gründliche Anweisung zur Komposition) to 20th century examples such as the book by Knud Jeppesen (Counterpoint: The Polyphonic Vocal Style of the Sixteenth Century).

The compositions of Johann Fux were catalogued by Ludwig Ritter von Köchel.

This article uses material from the article Johann Fux from the free encyclopedia Wikipedia and it is licensed under the GNU Free Documentation License.

Carl Maria von Weber Aufforderung zum Tanz op. 65
Update Required To play the media you will need to either update your browser to a recent version or update your Flash plugin.