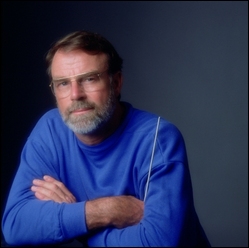 Erich Kunzel, Jr. (March 21, 1935 – September 1, 2009) was an American orchestra conductor. Called the "Prince of Pops" by the Chicago Tribune,[1][2] he performed with a number of leading pops and symphony orchestras, especially the Cincinnati Pops Orchestra (CPO), which he led for 32 years.

Kunzel was born to German-American immigrant parents in New York City. At Greenwich High School in Connecticut, he arranged music and played the piano, string bass, and timpani. Initially a chemistry major, Kunzel graduated from Dartmouth College with a degree in music, then studied at Harvard and Brown universities.[3] He conducted the Brown University Glee Club for at least two years. Early in his career, he conducted for the Santa Fe Opera and studied at the Pierre Monteux School.[4] He met his Austrian-born wife, Brunhilde, while conducting Gianni Schicchi for Santa Fe in 1964, and they married a year later.[5] From 1960 to 1965, he conducted the Rhode Island Philharmonic. From 1965 to 1977, Kunzel served as resident conductor of the Cincinnati Symphony Orchestra (CSO).[3]

In 1969, he was initiated as an honorary member of the Eta-Omicron chapter of Phi Mu Alpha Sinfonia music fraternity at the College-Conservatory of Music at the University of Cincinnati. He was also a National Patron of Delta Omicron, an international professional music fraternity.[6]

In 1965, Kunzel began the country's first winter pops series, the "8 O'Clock Pops". When the Cincinnati Symphony Orchestra board of trustees created the Cincinnati Pops Orchestra in 1977, Kunzel was named conductor. The Pops became the larger of Cincinnati's two orchestras, as all of Max Rudolf's symphony orchestra also played for the Pops year-round. At the invitation of Arthur Fiedler in 1970, Kunzel guest-conducted over 100 concerts with the Boston Pops Orchestra.[3] He remained active with symphony, leading the Indianapolis Symphony Orchestra (as Principal Pops Conductor) from 1982 to 2002.

From the beginning, Kunzel strove to expand the Cincinnati Pops' reach worldwide, with nearly 90 recordings on the Telarc label,[3] most of which became bestsellers. His popular recordings of classical music, Broadway musicals, and movie scores topped worldwide crossover charts more than any other conductor or orchestra in the world. Some of Kunzel's mentees at the Cincinnati Pops would later become notable in their own right, including Keith Lockhart of the Boston Pops and Steven Reineke of The New York Pops.[4]

Kunzel made most of his classical music recordings as director of the Cincinnati Pops. However, he also made jazz recordings with Dave Brubeck, Duke Ellington, and other well-known artists. From the Capitol Building lawn, Kunzel conducted the National Symphony Orchestra every Memorial Day and Fourth of July from 1991 to 2009, in concerts televised nationwide on PBS.[4] In 1987, his Aaron Copland: Lincoln Portrait (CD-80117) album with narration by Katharine Hepburn including Old American Songs sung by Sherrill Milnes received a Grammy nomination. Other Grammy nominations came in 1989 (A Disney Spectacular), 1991 (Meredith Willson's The Music Man), and 1993 (Amen!--A Gospel Celebration). The album American Jubilee won the Grand Prix du Disque in 1989. His albums frequently feature digital sound effects created by Michael Bishop.

The conductor had a large influence on Cincinnati's local music scene. In addition to conducting almost weekly subscription concerts with the Cincinnati Pops, he expanded the Pops program in 1984 to include a summer concert series at the newly built Riverbend Music Center on the banks of the Ohio River. He pushed for a new campus to house the city's public School for Creative and Performing Arts. He invited many local performers, including children's choruses and College-Conservatory students, to share the stage with the Pops.[4]

The recording engineer for Kunzel's recording of music by Copland earned a Grammy Award for Best Engineered Album, Classical in 1998, for Copland: The Music of America,[7] Kunzel earned the 2006 National Medal of Arts. In 2009, he was inducted into the American Classical Music Hall of Fame, based in Cincinnati.[4]

On June 20–21, 2008, Kunzel conducted The Toronto Symphony Orchestra's performance of Star Trek: The Music at Roy Thomson Hall in Toronto.

In April 2009, Kunzel was diagnosed with pancreatic, liver and colon cancer and received chemotherapy treatments in Cincinnati.[8] He performed a final concert at Riverbend on August 1, 2009. He died a month later at Bar Harbor, Maine, near his home at Swan's Island.[4] That day, the CSO board of trustees posthumously named him "Founder and Conductor Emeritus" of the Pops.[4]

This article uses material from the article Erich Kunzel from the free encyclopedia Wikipedia and it is licensed under the GNU Free Documentation License.