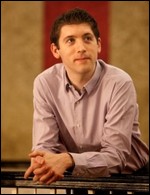 Finghin Collins (born 31 March 1977) is an Irish pianist. He won first prize at the Clara Haskil International Piano Competition in Vevey, Switzerland, in 1999, and has performed with many of the world's leading orchestras and conductors.

Collins is artist-in-Residence at Waterford Institute of Technology and artistic director of the New Ross Piano Festival.

This article uses material from the article Finghin Collins from the free encyclopedia Wikipedia and it is licensed under the GNU Free Documentation License.

Franz Schubert / Franz Liszt "Die Forelle", Transkription für Klavier
Update Required To play the media you will need to either update your browser to a recent version or update your Flash plugin.