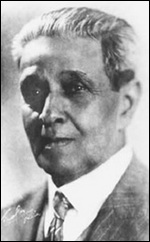 Ernesto Júlio de Nazareth (March 20, 1863 – February 1, 1934) was a Brazilian composer and pianist, especially noted for his creative Maxixe and Choro compositions. Influenced by African rhythms and many musical styles like the Lundu and the Choro,[1] he never fully accepted this influence, refusing to give popular names to his compositions.[2] A musician of classical training, he classified his music as "Brazilian tangos", since the Argentine tango and dances were considered fashionable at the time. His piano repertoire is now part of the teaching programs of both classical and popular styles, as Nazareth once served at the boundary between these two worlds.[2]

Ernesto Nazareth was born in Rio de Janeiro, one of five children. His mother, Carolina da Cunha gave him his first piano lessons. At the age of ten, after his mother's death, he continued his piano studies with Eduardo Moreira and Charles Lucien Lambert.

Strongly influenced by Chopin, Nazareth published his first composition Você Bem Sabe (1877), at age 14. At this time, he began his professional career playing in cafes, balls, society parties and in the waiting rooms of movie theaters. In 1893, Casa Vieira Machado published his famous tango Brejeiro.

In 1879, he wrote his first tango Cruz perigo. In 1880, at the age of 17, he made his first public appearance at the Mozart Club. The following year, he composed the tango Não caio n'outra, his first great success, with several reprints. In 1885, he performed in concerts in different clubs of the court. In 1893, Casa Vieira Machado launched a new catalogue of his compositions, including the tango Brejeiro, which achieved national and even international success, in that the Republican Guard band of Paris began to include it in their repertoire, coming even to record it.[1]

His first concert as a pianist took place in 1898. The following year he prepared the first edition of the tango Turuna. In 1905, he had his first work, Brejeiro, recorded by singer Mario Pinheiro with the title O sertanejo enamorado with lyrics by Catulo da Paixão Cearense. Meanwhile, the "Casa Édison" marching band recorded his tango Brushed, which became quite successful. In 1907 Ernesto Nazareth was appointed third book-keeper of the National Treasury, a position that he did not occupy for not mastering the English language.[3] In 1908, he began working as a pianist at the Mozart Club.

The following year, he participated in a concert held at the National Institute of Music, playing the gavotte Corbeille de fleurs and the tango Batuque. Instead, he began to teach private piano lessons and was hired as a pianist for "Casa Gomes" in 1921 and the Odeon Cinema from 1920-1924.[1] In São Paulo and Campinas he performed several shows in the Municipal Theater and at the Conservatory. He was given then a grand piano as a gift from his admirers. He was one of the first artists to play for the Society Radio of Rio de Janeiro. In 1932 he presented for the first time, a recital in which he performed only his compositions.

In 1933, after a period of mental instability, due to the deaths of his wife and daughter, diagnosed with syphilis and worsening hearing problems caused by a fall during childhood,[1] Nazareth was hospitalized at the Juliano Moreira Asylum in Jacarepaguá. On February 1, 1934, Nazareth fled the asylum and was found alone three days later in the adjacent forest near a waterfall, dead by drowning.[3]

Nazareth was noted for creatively combining diverse influences into his music, not only of Brazilian music but also from the music of Europe, Africa and ragtime. Many of his compositions remain part of the repertory today. He composed 88 tangos, 41 waltzes, 28 polkas and numerous sambas, galops, quadrilles, Schottisches, fox-trots, romances and other types of scores, totaling 211 complete compositions.

'Escovado' is a common slang which means 'smart'. Ary Vasconcelos tells us in his book Panorama da Musica Popular Brasileira that Nazareth was a "devoted family man who often gave the songs he composed titles in honor of his son, sometimes his wife, or another relative. Travesso was dedicated to his son Ernesto, Marieta and Eulina to his two daughters, Dora to his wife Theodora, Brejeiro to his nephew Gilbert, etc.[4]

Escovado was first published by Casa Vieira Machado & Co. and dedicated to Fernando Nazareth, the composer's younger brother. It became one of Nazareth's greatest success, having the main theme been later tapped by the French composer Darius Milhaud in his Le Boeuf sur le Toit (1919).[3] In September 1930, accepting an invitation made by Eduardo Souto, then artistic director of Odeon-Parlophone, Nazareth recorded this piece.[4]

This article uses material from the article Ernesto Nazareth from the free encyclopedia Wikipedia and it is licensed under the GNU Free Documentation License.

Richard Strauss Sinfonie f-Moll op.12
Update Required To play the media you will need to either update your browser to a recent version or update your Flash plugin.