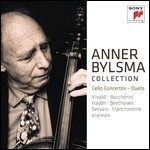 Anner Bylsma (born Anne Bijlsma 17 February 1934, The Hague) is a Dutch cellist who plays on both modern and period instruments in a historically informed style. He took an interest in music from an early age.[1] He studied with Carel van Leeuwen Boomkamp at the Royal Conservatory of The Hague and won the Prix d'excellence in 1957.

In 1959, he won the first prize in the Pablo Casals Competition in Mexico. Later he was for six years (from 1962 to 1968) the principal cellist in the Royal Concertgebouw Orchestra. He became an Erasmus Scholar at Harvard University in 1982. He is the author of the book Bach, the Fencing Master, a stylistic and aesthetic analysis of Bach's Cello Suites. He is one of the pioneers of the 'Dutch Baroque School' and rose to fame as a partner of Frans Brüggen and Gustav Leonhardt, who toured extensively together and made many recordings. Bylsma continues to be a towering figure in the baroque cello movement.

In 1979 Bylsma recorded the six Suites for unaccompanied cello (BWV 1007–1012) by J. S. Bach, the first of its kind on a period instrument. He later went on to recreate the same music in 1992 on the large Servais Stradivarius and on a five-string violoncello piccolo.

Anner Bylsma is married to Dutch violinist Vera Beths. He has a son and a daughter, documentary filmmaker Carine Bijlsma.

This article uses material from the article Anner Bylsma from the free encyclopedia Wikipedia and it is licensed under the GNU Free Documentation License.