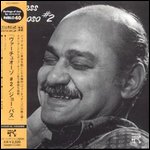 Joe Pass (born Joseph Anthony Jacobi Passalaqua; January 13, 1929 – May 23, 1994) was an American jazz guitarist of Sicilian descent. He is considered one of the greatest jazz guitarists of the 20th century.[1][2] He created possibilities for jazz guitar through his style of chord-melody, his knowledge of chord inversions and progressions, and his use of walking basslines and counterpoint during improvisation. Pass worked often with pianist Oscar Peterson and vocalist Ella Fitzgerald.

Born in New Brunswick, New Jersey,[3] Joe Pass, the son of Mariano Passalaqua, a Sicilian-born steel mill worker, was raised in Johnstown, Pennsylvania. He received his first guitar, a Harmony model bought for $17, on his 9th birthday. Pass' father recognized early that his son had "a little something happening" and pushed him constantly to pick up tunes by ear, play pieces not written specifically for the instrument, practice scales and to not "leave any spaces" - that is, to fill in the sonic space between the notes of the melody.

As early as 14, Pass started getting gigs and was playing with bands fronted by Tony Pastor and Charlie Barnet, honing his guitar skills and learning the music business. He began traveling with small jazz groups and eventually moved from Pennsylvania to New York City. In a few years, he developed a heroin addiction and spent much of the 1950s in prison. Pass managed to emerge from narcotics addiction through a two-and-a-half-year stay in the Synanon rehabilitation program. During that time he "didn't do a lot of playing".[4] In 1962 he recorded Sounds of Synanon. It was about this time that Pass received his trademark Gibson ES-175 guitar as a gift, which he subsequently used for touring and recording for many years.

Pass recorded a series of albums during the 1960s for the Pacific Jazz label, including the early classics Catch Me, 12-String Guitar, For Django, and Simplicity. In 1963, Pass received Downbeat magazine's "New Star Award." Pass was also featured on Pacific Jazz recordings by Gerald Wilson, Bud Shank, and Les McCann. Pass toured with George Shearing in 1965. During the 1960s however, he did mostly TV and recording session work in Los Angeles.

He was a sideman with Louis Bellson, Frank Sinatra, Sarah Vaughan, Joe Williams, Della Reese, Johnny Mathis, and worked on TV shows including The Tonight Show Starring Johnny Carson, The Merv Griffin Show, The Steve Allen Show, and others. In the early 1970s, Pass and guitarist Herb Ellis were performing together regularly at Donte's jazz club in Los Angeles. This collaboration led to Pass and Ellis recording the very first album on the new Concord Jazz label, entitled simply Jazz/Concord (#CJS-1), along with bassist Ray Brown and drummer Jake Hanna. In the early 1970s, Pass also collaborated on a series of music books, and his Joe Pass Guitar Style (written with Bill Thrasher) is considered a leading improvisation textbook for students of jazz.

Norman Granz, the producer of Jazz at the Philharmonic and the founder of Verve Records signed Pass to Granz's new Pablo Records label in 1970. In 1974, Pass released his landmark solo album Virtuoso on Pablo Records. Also in 1974, Pablo Records released the album The Trio featuring Pass, Oscar Peterson, and Niels-Henning Ørsted Pedersen. He performed with them on many occasions throughout the 1970s and 1980s. At the Grammy Awards of 1975, The Trio won the Grammy Award for Best Jazz Performance by a Group. As part of the Pablo Records "stable," Pass also recorded with Benny Carter, Milt Jackson, Herb Ellis, Zoot Sims, Duke Ellington, Dizzy Gillespie, Ella Fitzgerald, Count Basie, and others.

In 1994, Joe Pass died from liver cancer in Los Angeles, California at the age of 65. Prior to his death, he had recorded an album of instrumental versions of Hank Williams songs with country guitarist Roy Clark.

The follow up to 1993's Joe Pass & Co. Live At Yoshi's, this release was colored by sad circumstances: both bassist Monty Budwig and Pass were stricken with fatal illnesses. Nevertheless, all concerned, including drummer Colin Bailey and second guitarist John Pisano, play up to their usual high levels.... Issued posthumously, this material is hardly sub-standard. Bristling with energy throughout, it helps document the final stages in the career of a player who, arguably, was the greatest mainstream guitarist since Wes Montgomery.[5]

In addition to his ensemble performances, the jazz community regarded Joe Pass as an influential solo guitarist. New York Magazine said of him, "Joe Pass looks like somebody's uncle and plays guitar like nobody's business. He's called 'the world's greatest' and often compared to Paganini for his virtuosity. There is a certain purity to his sound that makes him stand out easily from other first-rate jazz guitarists."[2] His solo style was marked by an advanced linear technique, sophisticated harmonic sense, counterpoint between improvised lead lines, bass figures and chords, spontaneous modulations, and transitions from fast tempos to rubato passages. He would regularly add what he called "color tones" to his compositions, to give what he believed was a more sophisticated and "funkier" sound. He would often use melodic counterpoint during improvisation, move lines and chords chromatically or play melodies by solely shifting chords, and descending augmented arpeggios at the end of phrases.

Pass' early style (influenced by guitarist Django Reinhardt and saxophonist Charlie Parker), was marked by fast single-note lines. Pass would break his guitar picks and playing only with the smaller part. As Pass made the transition from ensemble to solo guitar performance, he preferred to abandon the pick altogether, and play fingerstyle. He found this enabled him to execute his harmonic concepts more effectively.

"He weaves his own fast-moving chords and filigree work so nimbly that it is hard to believe fingers can physically shift so quickly. Slight moustached, fairly balding, he frowns over his fretwork like a worried head waiter with more guests than tables but the sound that comes out could only be the confident product of years of devotion to the instrument... But it is when he plays completely solo, which he does for half of each set, that he comes into his own, because without hindrance of the rhythm section he can completely orchestrate each number. Sometimes it is by contrasting out of tempo sections with fast-moving interludes, sometimes by switching mood from wistful to lightly swinging, sometimes by alternating single-note lines with chords or simultaneous bass line and melody-the possibilities seem endless. Luckily, there is a new L.P. by him which captures all this on vinyl, as someone has had the unusual good sense to record him all alone. It is called Virtuoso and rightly so." - Miles Kington on Pass in an October 1974 article in The Times.[6]

Epiphone has produced an edition of the Emperor line of archtop electric-acoustic guitar in his honor. Previously Ibanez had a Joe Pass model jazz guitar.

This article uses material from the article Joe Pass from the free encyclopedia Wikipedia and it is licensed under the GNU Free Documentation License.