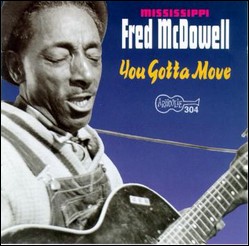 McDowell was born in Rossville, Tennessee. His parents, who were farmers, died when McDowell was a youth. He started playing guitar at the age of 14 and played at dances around Rossville. Wanting a change from plowing fields, he moved to Memphis in 1926 where he started to work in the Buck-Eye feed mill where they processed cotton into oil and other products.[1] He also had a number of other jobs and played music for tips. Later in 1928 he moved south into Mississippi to pick cotton.[1] He settled in Como, Mississippi, about 40 miles south of Memphis, in 1940 or 1941, and worked steadily as a farmer, continuing to perform music at dances and picnics. Initially he played slide guitar using a pocket knife and then a slide made from a beef rib bone, later switching to a glass slide for its clearer sound. He played with the slide on his ring finger.[2]

While commonly lumped together with Delta Blues singers, McDowell actually may be considered the first of the bluesmen from the 'North Mississippi' region - parallel to, but somewhat east of the Delta region - to achieve widespread recognition for his work. A version of the state's signature musical form somewhat closer in structure to its African roots (often eschewing the chord change for the hypnotic effect of the droning, single chord vamp), the north hill country blues style (or at least its aesthetic) may be heard to have been carried on in the music of such figures as Junior Kimbrough and R. L. Burnside, while serving as the original impetus behind creation of the Fat Possum record label out of Oxford, Mississippi.[3]

The 1950s brought a rising interest in blues music and folk music in the United States and McDowell was brought to wider public attention, beginning when he was discovered and recorded in 1959 by Alan Lomax and Shirley Collins.[4] McDowell's records were popular, and he performed often at festivals and clubs.[5] McDowell continued to perform blues in the North Mississippi blues style much as he had for decades, but he sometimes performed on electric guitar rather than acoustic guitar. While he famously declared "I do not play no rock and roll," McDowell was not averse to associating with many younger rock musicians: He coached Bonnie Raitt on slide guitar technique,[5] and was reportedly flattered by The Rolling Stones' rather straightforward, authentic version of his "You Gotta Move" on their 1971 Sticky Fingers album . In 1965 he toured Europe with The American Folk Blues Festival, together with Big Mama Thornton, John Lee Hooker, Buddy Guy, Roosevelt Sykes and others.[6]

McDowell's 1969 Malaco Records album I Do Not Play No Rock 'N' Roll, recorded in Jackson, Mississippi, was his first featuring electric guitar. It features parts of an interview in which he discusses the origins of the blues and the nature of love. McDowell's final album,[7] Live in New York (Oblivion Records), was a concert performance from November 1971 at the Village Gaslight (aka The Gaslight Cafe), Greenwich Village, New York.

McDowell died of cancer in 1972, aged 68, and was buried at Hammond Hill Baptist Church, between Como and Senatobia, Mississippi. On August 6, 1993 a memorial was placed on his grave site by the Mt. Zion Memorial Fund. The ceremony was presided over by Dick Waterman, and the memorial with McDowell's portrait upon it was paid for by Bonnie Raitt. The memorial stone was a replacement for an inaccurate and damaged marker (McDowell's name was misspelled) and the original stone was subsequently donated by McDowell's family to the Delta Blues Museum in Clarksdale, Mississippi.

This article uses material from the article Mississippi Fred McDowell from the free encyclopedia Wikipedia and it is licensed under the GNU Free Documentation License.