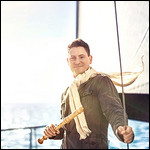 born in 1971 in Winterthur, ZH, Switzerland

His projects about Tino Flautino, musical fairy-tales for children, have enjoyed great success and are also available on CD (Philips a.o.), in books and on play-along products.

In addition, Maurice Steger has recorded several albums, many of which have been crowned with international awards, including Vivaldi's concertos for recorder, the Telemann flute quartets for Deutsche Grammophon (with Reinhard Goebel and the Musica Antiqua Köln). Steger records for harmonia mundi. He won the most important classical awards for his projects, the solo concerts of Telemann with the Akademie für Alte Musik Berlin and the album Giuseppe Sammartini (2007) with his own consort. The latest recordings are an album of early Baroque music, Venezia 1625,[1] a dazzling CD with Corelli Concertos Mr. Corelli in London and "Una Follia di Napoli" with Concertos by Southern Italian Composers (2013).

This article uses material from the article Maurice Steger from the free encyclopedia Wikipedia and it is licensed under the GNU Free Documentation License.