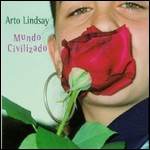 Arthur Morgan "Arto" Lindsay (born May 28, 1953) is an American guitarist, singer, record producer and experimental composer.[1] He first achieved recognition as part of New York no wave group DNA in the late 1970s.

He has a distinctive soft voice and an often noisy, self-taught guitar style consisting almost entirely of extended techniques, described by Brian Olewnick as "studiedly naïve ... sounding like the bastard child of Derek Bailey".[2] His guitar work is contrasted frequently with gentler, sensuous Brazilian music themes.

Although Lindsay was born in the United States, he spent many years in Brazil with his missionary parents and came of age during the influential Tropicália movement of Brazilian culture, which included musicians Caetano Veloso, Gal Costa, Os Mutantes and Gilberto Gil, as well as the visual artists Hélio Oiticica, Lygia Clark and Antonio Dias. This time of cultural experimentation and artistic cross-pollination made an enduring impact on the young Lindsay.

In New York City, Lindsay began his artistic ambitions as a writer, but quickly became interested in the art and music scenes that were evolving out of the New York punk rock scene at the time.

In the late 1970s, he co-formed the seminal no wave group DNA with Ikue Mori and Robin Crutchfield, although Tim Wright of Pere Ubu fame would soon replace Crutchfield. In 1978, DNA was featured on the four-band sampler No New York (produced by Brian Eno) which brought an early taste of international notoriety to the group, and which quickly became the essential document of No Wave. The rock critic Lester Bangs once described the group's ritualistic vocals, and deliberately primitive, speaker-shredding guitar as “horrible noise.”

In the early 1980s, Lindsay, and his particular style of guitar work and singing featured prominently in the early recordings of The Lounge Lizards and The Golden Palominos. These groups continued to break down distinctions between rock music, pop music, improvisation and avant-garde experimentalism. It was during this time that Lindsay established a collaborative friendship with John Zorn, playing in a number of his ensembles including Locus Solus.

After leaving the Lounge Lizards, Lindsay formed the Ambitious Lovers with keyboardist Peter Scherer. This music was decidedly more pop influenced and featured more prominent attention to Brazilian music, like samba and bossa nova. In an interview with BOMB magazine, Lindsay explained, "Listen to the Ambitious Lovers, the whole idea was Al Green and samba. That against this; this against that; not a blend, a juxtaposition, loud/soft. There's no particular point in putting these things together. The point is what comes out in the end."[3] Although their three albums, Greed, Envy,[4] and Lust were Lindsay's first forays with a major record label, these albums genre-bending pop never caught on in the mainstream. The Ambitious Lovers disbanded in 1991, although Lindsay continued a strong working relationship with Scherer, and continued to record with him.

Throughout the late 1980s and through the 1990s, Lindsay also composed a number of soundtracks, dance commissions and continued in a No Wave- related styles most notably with the Arto Lindsay Trio, with Gibbs and Dougie Bowne, who released Aggregates 1-26 on the Knitting Factory label in 1995. He performed on the track "Counting the Roses," featured in the video game D2.

In 1998, he collaborated with Arnaldo Antunes and Davi Moraes on the track "Sem Você" for the AIDS benefit compilation album Onda Sonora: Red Hot + Lisbon produced by the Red Hot Organization.

In 2004, he co-produced and played with Seb el Zin on the Anarchist Republic of Bzzz album, also featuring Marc Ribot, Mike Ladd and Sensational.

Lindsay has appeared in a number of films, usually in tie-ins with other artists. Lindsay had a cameo appearance in the Madonna vehicle Desperately Seeking Susan and can be seen playing guitar in Downtown 81, a film about the art and music in the East Village featuring Jean-Michel Basquiat and Deborah Harry. He is also featured in Step Across the Border, a documentary on the musician Fred Frith, directed by Nicolas Humbert and Werner Penzel (1990) and in Kill Your Idols, a documentary directed by Scott Crary (2004). His song 'Too Many Mansions' is also featured in the film Kiss Daddy Goodnight which stars Uma Thurman and Steve Buscemi.

From Lindsay's early days in New York amidst the burgeoning art and music scene of the East Village, he was able to befriend and collaborate with a number of visual artists who have gone on to important careers in art. With Diego Cortez (born James Curtis) — who would become the art director for all his solo endeavors starting in the mid-1990s — Lindsay became immersed in an art community that included Jean-Michel Basquiat and Vito Acconci. Since then, Lindsay has included the work of Nan Goldin, Kara Walker, Matthew Barney, Philip Taaffe and Frédéric Bruly Bouabré on his albums.

He has also collaborated with Japanese artist Noritoshi Hirakawa at an exhibition at Deitch Projects, and as part of a sound-art exhibition at PS1, a gallery in New York. His list of artist collaborations is long ranging from a parade with Matthew Barney to soundtracks for Dominique Gozalez-Foerter and Phillipe Parreno and installations with Rirkrit Tiravanija.

Arto Lindsay has written the epilogue for the official biography of the German experimental band Einstürzende Neubauten No beauty without danger (German title: Nur was nicht ist, ist möglich).

In 2013, Arto Lindsay contributed vocals to the song ″I Guess We're Floating" by Stephon Alexander & Rioux (musician). The song was released on the album Here Comes Now in August 2014 on Connect Records.[6]

This article uses material from the article Arto Lindsay from the free encyclopedia Wikipedia and it is licensed under the GNU Free Documentation License.