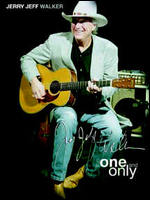 He is best known for writing "Mr. Bojangles".[2]

Walker's maternal grandparents played for square dances in the Oneonta area, with his grandmother, Jessie Conroe, playing piano, and her husband playing fiddle. During the late 1950s, Crosby was a member of a local Oneonta teen band called The Tones.

The band traveled to Philadelphia to audition for Dick Clark's American Bandstand, but were turned down. Members of the band found Dick Clark's house and were able to get a recommendation to audition at New York City's Baton Records through the company's lead producer Sol Rabinowitz. The band was given a recording contract, but the studio wanted a quintet backed by studio musicians, which left Crosby and another member (Jerry Russell) out of their recordings.

After high school, Crosby joined the National Guard, but his thirst for adventure led him to go AWOL and roam the country busking for a living in New Orleans and throughout Texas, Florida, and New York, often accompanied by H.R. Stoneback (a friendship referenced in 1970's "Stoney"). He played mostly ukulele until Harriet Ottenheimer, one of the founders of The Quorum, got him settled on a guitar in 1963. He adopted his stage name "Jerry Jeff Walker" in 1966.

He spent his early folk music days in Greenwich Village in the mid-1960s. He co-founded a band with Bob Bruno in the late-1960s called Circus Maximus that put out two albums, one with the popular FM radio hit "Wind", but Bruno's interest in jazz apparently diverged from Walker's interest in folk music. Walker thus resumed his solo career and recorded the seminal album Mr. Bojangles with the help of David Bromberg and other influential Atlantic recording artists. He settled in Austin, Texas, in the 1970s, associating mainly with the outlaw country scene that included artists such as Michael Martin Murphey, Willie Nelson, Guy Clark, Waylon Jennings, and Townes Van Zandt.

Walker's "Mr. Bojangles" is perhaps his most well-known and most-often covered song.[1] It was about an obscure alcoholic but talented tap-dancing drifter who, when arrested and jailed in New Orleans, insisted on being identified only as Bojangles (the nickname of famed dancer Bill Robinson).

In his autobiography Gypsy Songman, Walker makes it clear the man he met was white. Further, in an interview with BBC Radio 4 in August 2008, he pointed out that at the time the jail cells in New Orleans were segregated along color lines, so his influence could not have been black. Bojangles is thought to have been a folk character who entertained informally in the South and California, with authentic reports of him existing from the 1920s through about 1965. Walker recorded songs written by others such as "LA Freeway" (Guy Clark), "Up Against the Wall Red Neck Mother" (Ray Wylie Hubbard), "(Looking for) The Heart of Saturday Night" (Tom Waits) and "London Homesick Blues" (Gary P. Nunn).

A string of records for MCA and Elektra followed Jerry Jeff's move to Austin, Texas, before he gave up on the mainstream music business and formed his own independent record label. Tried & True Music was founded in 1986, with his wife Susan as president and manager. Susan also founded Goodknight Music as his management company and Tried & True Artists for his bookings. A series of increasingly autobiographical records followed under the Tried & True imprint. Tried & True also sells his autobiography, Gypsy Songman. In 2004, Jerry Jeff released his first DVD of songs from his past as performed in an intimate setting in Austin.

He has interpreted the songs of others like Rodney Crowell, Guy Clark, Townes Van Zandt, Paul Siebel, Bob Dylan, Todd Snider, Dave Roberts, and even a rodeo clown named Billy Jim Baker. Some have called Jerry Jeff the Jimmy Buffett of Texas. It was Jerry Jeff who first drove Jimmy Buffett to Key West (from Coconut Grove, Florida in a Packard). Walker and Buffett also co-wrote the song "Railroad Lady" while riding the last run of the Panama Limited.

Jerry married Susan Streit in 1974 in Travis County, Texas.[1] They have two children: a son, Django Walker, who is also a musician, and a daughter Jessie Jane. Walker has a retreat on Ambergris Caye in Belize, where he recorded his Cowboy Boots and Bathing Suits album in 1998.

Walker has an annual birthday celebration bash in Austin at the Paramount Theatre and at Gruene Hall in Gruene, Texas.[1] This party has become an enormous event in Texas and brings some of the biggest names in country music out for a night of picking and swapping stories under the Austin skyline. Jimmy Buffett attended the 2004 birthday bash.

This article uses material from the article Jerry Jeff Walker from the free encyclopedia Wikipedia and it is licensed under the GNU Free Documentation License.

Ferdinando Carulli Larghetto und Finale aus der Serenade A-Dur op. 96 Nr. 1
Update Required To play the media you will need to either update your browser to a recent version or update your Flash plugin.