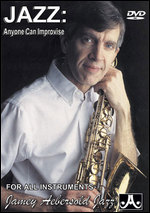 Jamey Aebersold (born July 21, 1939 in New Albany, Indiana)[1] is an American jazz saxophonist and music educator. His "Play-A-Long" series of instructional book and CD collections, using the chord-scale system, the first of which was released in 1967, are an internationally renowned resource for jazz education. As of 2013, 133 of these collections have been published by Aebersold, who taught musical improvisation at the University of Louisville for a number of years. He is also an adept pianist, alto saxophonist, bassist, and banjoist.

Most of the volumes in Aebersold's "Play-A-Long" series feature a selection of 10-12 jazz standards, though some focus on scales, standardized chord progressions (like the blues), or original compositions by Aebersold's collaborators. The books contain charts for the tunes in question, transposed as necessary for instruments in C, B-flat, E-flat, and bass clef. The recordings normally feature a professional rhythm section (typically piano, bass, and drums, occasionally including guitar) performing an improvised accompaniment (or "comping") to each song. Melody instruments like saxophone and trumpet are omitted, enabling a jazz student to practice playing the song's melody, and improvising over the song's chord changes, with accompaniment. (Related examples of this format include the "Music Minus One" series and the popular pastime of karaoke.) The piano and bass tracks are typically panned to opposite channels, so that a pianist or bassist can easily omit the recorded piano or bass part by muting the appropriate channel.

Perhaps the most well-known feature of the "Play-A-Long" series is Aebersold's distinctive voice, which counts off the tempo for each track on most Aebersold recordings.[2]

For almost 40 years, Aebersold has also run "Summer Jazz Workshop" sessions at the University of Louisville (Louisville, Kentucky). Many leading educators and performers have served as Workshop faculty. The week-long event is billed as a place to learn jazz through hands-on experience, and provides an intensive learning environment for musicians of widely varying ages and levels. The standard Workshop curriculum includes master classes, ear-training sessions, jazz theory classes from beginning to advanced, and concerts by faculty.[5]

In 2009, he was initiated as a member of the Alpha Alpha national honorary chapter of Phi Mu Alpha Sinfonia, the oldest and largest music fraternity in the world, at its national convention in Orlando, Florida. At the same time, he was named the Fraternity's triennial recipient of the Charles E. Lutton Man of Music Award.

In July 2013, the National Endowment for the Arts included him for its 2014 Jazz Masters award, the nation's highest honor in jazz. Other recipients included Richard Davis, Keith Jarrett, and Anthony Braxton. Jamey Aebersold is the recipient of the 2014 A.B. Spellman NEA Jazz Masters Award for Jazz Advocacy, which is bestowed upon an individual who has contributed significantly to the appreciation, knowledge, and advancement of the art form of jazz. "Jamey Aebersold has made enormous contributions to the jazz world through his tireless efforts as a performer, educator, and publisher," said 2000 NEA Jazz Master David Baker who is also on the faculty of the Summer Jazz Workshops, directed by Aebersold. "As the creator of the innovative and groundbreaking Jamey Aebersold Jazz Play-A-Long recordings series, as the longtime director of the Jamey Aebersold Summer Jazz Workshops, as an exceptional clinician and performer, and as the publisher of an extensive catalogue of jazz materials, Jamey has revolutionized the way people practice, teach, create, and perform their music. Jamey has carried his message that 'anyone can improvise' and that 'creativity is part of the nature of every person' throughout the world to great success, impacting generations of both aspiring and established jazz performers and teachers."

These musicians and educators, now awarded the nation's highest honor in the field, are recognized for their lifetime achievements and exceptional contributions to the advancement of jazz. They will each receive a one-time award of $25,000. An awards ceremony & concert will be held on January 13, 2014, at Jazz at Lincoln Center in New York City, which will be webcast live at arts.gov and jalc.org/live.

This article uses material from the article Jamey Aebersold from the free encyclopedia Wikipedia and it is licensed under the GNU Free Documentation License.