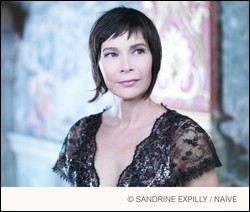 Born in Issy-les-Moulineaux, she originally trained as a harpist, she studied voice at the Collège Lamartine and the Conservatoire National Supérieur de Musique du Paris. She is best known for her roles in Baroque opera, having worked with William Christie at the Aix-en-Provence Festival.

She collaborated with many of the leading European conductors of the Baroque revival, including Marc Minkowski, Philippe Herreweghe, Paul McCreesh, Alan Curtis, Christophe Rousset, René Jacobs, and Fabio Biondi. She took part in the project of Ton Koopman and the Amsterdam Baroque Orchestra & Choir to record the complete vocal works of Johann Sebastian Bach.

She was named a Chevalier de l'Ordre des Arts et des Lettres in 2006 by the French government.[1]

This article uses material from the article Sandrine Piau from the free encyclopedia Wikipedia and it is licensed under the GNU Free Documentation License.