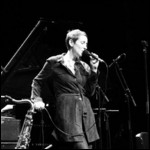 Stacey Kent (born March 27, 1965) is an American jazz singer who often sings in French. She is married to saxophonist Jim Tomlinson.

Stacey Kent is a Grammy nominated, Platinum-selling American jazz singer and recording artist. Kent was born in South Orange, New Jersey and attended Newark Academy in Livingston, New Jersey.[1] Her paternal grandfather was Russian who grew up in France.[2] She graduated from Sarah Lawrence College. She travelled to England after graduation to study music at Guildhall School of Music and Drama in London, where she met saxophonist Jim Tomlinson, whom she married on August 9, 1991.

In the 1990s, she began her professional career singing regularly at Café Boheme in London's Soho. After two or three years, she began opening for established acts at Ronnie Scott's Jazz Club in London. Her first album, Close Your Eyes, was released in 1997.

Novelist Kazuo Ishiguro wrote the liner notes to Kent's 2003 album, In Love Again. Ishiguro first met Kent after he chose her recording of "They Can't Take That Away from Me" as one of his Desert Island Discs in 2002 and Kent subsequently asked Tomlinson and Ishiguro to write for her. Ishiguro has said of his lyric writing that "with an intimate, confiding, first-person song, the meaning must not be self-sufficient on the page. It has to be oblique, sometimes you have to read between the lines" and that this realisation has had an "enormous influence" on his fiction writing.[3] Tomlinson and Ishiguro co-wrote four songs on the album, Breakfast on the Morning Tram. The first of their songs, "The Ice Hotel", won first prize in the International Songwriting Competition in April 2008. Tomlinson and Ishiguro continue to collaborate for Kent and she has recorded several more Tomlinson/Ishiguro songs on Dreamer in Concert, The Changing Lights and I Know I Dream.

Dreamer In Concert (2011) was recorded in May, 2011, at La Cigale in Paris. The album includes three songs previously unrecorded by Kent: "Waters of March" by Antonio Carlos Jobim, "Postcard Lovers" by Jim Tomlinson with lyrics by Kazuo Ishiguro, and "O Comboio" by Portuguese poet António Ladeira.

In 2013, Kent released The Changing Lights, a Brazilian-tinged album, covering Bossa Nova classics such as Jobim's How Insensitive and once again, collaborating with her songwriting team, Tomlinson/Ishiguro. In 2014, Kent left Warner Bros. Records and signed with Sony. In 2014, she released her first album on Sony, Tenderly, an album of standards featuring Brazilian guitarist and one of the fathers of bossa nova, Roberto Menescal. Kent met Menescal in Brazil in 2011, at the 80th Birthday celebration of O Cristo Redentor, the statue on Corcovado. They discovered that each was a fan of the other's work and decided to collaborate on an album of all standards, inspired by Menescal's love of the Julie London / Barney Kessel duo.

In 2014, Kent was invited by Brazilian composer, Marcos Valle, to record and tour in celebration of Valle's 50 years of his career. Together, they recorded an album live in Rio, called Ao Vivo, and a DVD live from Birdland, New York City and Blue Note, Tokyo.

In 2017, Kent recorded her next album for Sony, I Know I Dream: The Orchestral Sessions, her first album with orchestra, comprising 58 musicians, arrangements by Tommy Laurence, covering music from The Great American Songbook, French Chansons, songs from Edu Lobo and Antonio Carlos Jobim from Brazil, and further original songs from Jim Tomlinson with Ishiguro, Ladeira and his most recent songwriting partner, Cliff Goldmacher, from Nashville. Tomlinson/Goldmacher provide the title track.

Jean-Claude Ellena, the French perfumier or "nose," who has been Hermès's exclusive in-house perfumer since 2004, cites Kent as one of his inspirations. In an excerpt from the book, 'La Seduction, by Elaine Sciolino: "Ellena is said to be the most articulate perfumer in the world, capable of translating the scents he creates into poetry... It is this talent that sets him apart. He professes to draw inspiration from literary figures like Beaudelaire, composers like Debussy, painters like Cezanne and jazz singers like Stacey Kent. He spins his impressions into creations that trigger memories and fantasies."

This article uses material from the article Stacey Kent from the free encyclopedia Wikipedia and it is licensed under the GNU Free Documentation License.