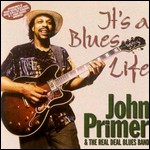 He played guitar at Theresa's, a club in Chicago, between 1974 and 1980. He was influenced by Muddy Waters' former sideman, Sammy Lawhorn, who taught him to play slide guitar. He joined the Chicago Blues All-Stars of Willie Dixon in 1979, then the Muddy Waters's band until the latter's death in 1983. Then he joined the Teardrops of Magic Slim and began a solo career on Wolf Records.[3]

In 1995 he released, The Real Deal, with songwriting and singing techniques showing the influence of both Dixon and Slim.[3]

In 2013, Primer was the special guest on Shawn Holt & the Teardrops' debut recording, Daddy Told Me.[4] Shawn Holt being Magic Slim's son.[5]

The Muddy Waters 100 album,[8] recorded by Primer and various other artists, was nominated for a Grammy Award in 2016 for Best Blues Album.[9]

In 2016, Primer won a Blues Music Award as the 'Traditional Blues Male Artist of the Year'.[10]

This article uses material from the article John Primer from the free encyclopedia Wikipedia and it is licensed under the GNU Free Documentation License.