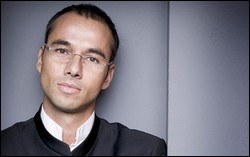 born in 1970 in Netherlands

Renes was the first prize winner at the 1992 Nederlandse Omroep Stichting conducting course NIS. In 1992, he also won the Elisabeth Everts Prize. He made his professional conducting debut with the Orchestra of Gran Canaria. He has served as an assistant conductor to Edo de Waart with the Netherlands Radio Philharmonic. His international prominence increased after his emergency replacement of Riccardo Chailly to conduct a 1995 concert with the Royal Concertgebouw Orchestra. In 1996, Renes was named principal guest conductor of the Netherlands Radio Philharmonic. Renes became chief conductor of Het Gelders Orkest (Arnhem, the Netherlands) in 1998 and held the post through 2002.

In contemporary music, Renes has championed the music of John Adams. He conducted both the first commercial recording of Adams' opera Doctor Atomic, with De Nederlandse Opera,[2] and the UK premiere of the work at English National Opera.[3] He has also conducted commercial recordings on such labels as Erato.[4]

This article uses material from the article Lawrence Renes from the free encyclopedia Wikipedia and it is licensed under the GNU Free Documentation License.