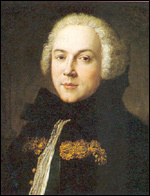 Ridolfo Luigi Boccherini[1] (Italian pronunciation: [riˈdɔlfo luˈiːdʒi bokkeˈriːni] (listen); February 19, 1743 – May 28, 1805) was an Italian composer and cellist of the Classical era whose music retained a courtly and "galante" style even while he matured somewhat apart from the major European musical centers. He is best known for a minuet from his String Quintet in E, Op. 11, No. 5 (G 275), and the Cello Concerto in B flat major (G 482). The latter work was long known in the heavily altered version by German cellist and prolific arranger Friedrich Grützmacher, but has recently been restored to its original version.

Boccherini also composed several guitar quintets, including the "Fandango", which was influenced by Spanish music. His biographer Elisabeth Le Guin[2] noted among Boccherini's musical qualities "an astonishing repetitiveness, an affection for extended passages with fascinating textures but virtually no melodic line, an obsession with soft dynamics, a unique ear for sonority, and an unusually rich palette of introverted and mournful affects."

Boccherini was born into a musical family in Lucca, Italy in 1743.[3] He was the third child of Leopoldo Boccherini, a cellist and double-bass player, and the brother of Giovanni Gastoni Boccherini, a poet and dancer who wrote librettos for Antonio Salieri and Joseph Haydn.[4] Luigi received his first music lessons at age five by his father, who taught him cello, and then continued his studies at age nine with Abbé Vanucci, music director of a local cathedral, at San Martino.[5] When his son reached thirteen, Leopoldo Boccherini sent him to study in Rome with Giovanni Battista Costanzi.[5] In 1757 Luigi Boccherini and his father both went to Vienna, where the court employed them as musicians in the Burgtheater. In 1761 Boccherini went to Madrid, entering in 1770 the employ of Infante Luis Antonio of Spain (1727–1785), younger brother of King Charles III of Spain. There, Boccherini flourished under royal patronage, until one day when the King expressed his disapproval at a passage in a new trio, and ordered Boccherini to change it. The composer, no doubt irritated with this intrusion into his art, doubled the passage instead, which led to his immediate dismissal. Then he accompanied Don Luis (the Infante) to Arenas de San Pedro, a little town in the Gredos Mountains in Ávila; there and in the nearest town of Candeleda Boccherini wrote many of his most famous works.

Later patrons included the French ambassador to Spain, Lucien Bonaparte (1775–1840), as well as King Friedrich Wilhelm II of Prussia (1744–1797), himself an amateur cellist, flautist, and avid supporter of the arts. Boccherini fell on hard times following the deaths of his Spanish patron (1785), his two wives (1785 and 1805), and his four daughters (1796, 1802 and 1804). He died in Madrid in 1805, survived by two sons. His bloodline continues to this day in Spain.[6] His body lay buried in the Pontifical Basilica of St. Michael in Madrid until 1927, when Benito Mussolini had his remains repatriated and buried in the church of San Francesco in his native Lucca.

Much of Boccherini's chamber music follows models established by Joseph Haydn; however, Boccherini is often credited with improving Haydn's model of the string quartet by bringing the cello to prominence, whereas Haydn had frequently relegated it to an accompaniment role. Some sources for Boccherini's style are in the works of a famous Italian cellist, Giovanni Battista Cirri, who was born before Boccherini and before Haydn, and in Spanish popular music.

A virtuoso cellist, Boccherini often played violin repertoire on the cello, at pitch, a skill he developed by substituting for ailing violinists while touring. This supreme command of the instrument brought him much praise from his contemporaries (notably Pierre Baillot, Pierre Rode, and Bernhard Romberg), and is evident in the cello parts of his compositions (particularly in the quintets for two cellos, treated often as cello concertos with string-quartet accompaniment).

He wrote a large amount of chamber music, including over one hundred string quintets for two violins, viola and two cellos (a type which he pioneered, in contrast with the then common scoring for two violins, two violas and one cello), a dozen guitar quintets, not all of which have survived, nearly a hundred string quartets, and a number of string trios and sonatas (including at least 19 for the cello). His orchestral music includes around 30 symphonies and 12 virtuoso cello concertos.

Boccherini's works have been catalogued by the French musicologist Yves Gérard (born 1932) in the Gérard catalog, published in London (1969), hence the "G" numbers applied to his output.

With a ministerial decree dated 27 April 2006, the Opera Omnia of the composer Luigi Boccherini was promoted to the status of Italian National Edition.

Boccherini's style is characterized by Rococo charm, lightness, and optimism, and exhibits much melodic and rhythmic invention, coupled with frequent influences from the guitar tradition of his adopted country, Spain.

Boccherini's works have been gaining more recognition since the late 20th century, in print, record, and concert hall. His "celebrated minuet" (String Quintet in E, Op. 11, No. 5 (G 275)) was popularized through its use in the film The Ladykillers. His famous "Musica notturna delle strade di Madrid" (String Quintet in C major, Op. 30 No. 6, G324), became popular through its frequent use in films such as Master and Commander: The Far Side of the World, and its use during the opening of the Barcelona 1992 Summer Olympic Games.

His distinctive compositions for string quintet (two violins, one viola, two cellos), long neglected after his death, have been brought back to life by the Quintet that bears his name in the second half of the 20th century, when two of its founding members discovered a complete collection of the first edition of the 141 string quintets in Paris and began playing and recording them around the world.

This article uses material from the article Luigi Boccherini from the free encyclopedia Wikipedia and it is licensed under the GNU Free Documentation License.

Antonio Caldara / Nicola Matteis (jun) Balletto
Update Required To play the media you will need to either update your browser to a recent version or update your Flash plugin.