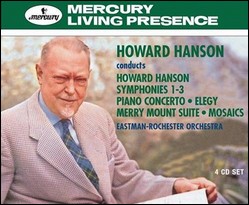 Howard Harold Hanson (October 28, 1896 – February 26, 1981) was an American composer, conductor, educator, music theorist, and champion of American classical music. As director for 40 years of the Eastman School of Music, he built a high quality school and provided opportunities for commissioning and performing American music. He won a Pulitzer Prize for one of his works and received numerous other awards. [1]

Hanson was born in Wahoo, Nebraska to Swedish immigrant parents, Hans and Hilma (Eckstrom) Hanson. In his youth he studied music with his mother. Later, he studied at Luther College in Wahoo, Nebraska, receiving a diploma in 1911, then at the Institute of Musical Art, the forerunner of the Juilliard School, in New York City, where he studied with the composer and music theorist Percy Goetschius in 1914. Afterward he attended Northwestern University, where he studied composition with church music expert Peter Lutkin and Arne Oldberg in Chicago. Throughout his education, Hanson studied piano, cello and trombone. Hanson earned his BA degree in music from Northwestern University in 1916, where he began his teaching career as a teacher's assistant.[2]

In 1916, Hanson was hired for his first full-time position as a music theory and composition teacher at the College of the Pacific in California. Only three years later, the college appointed him Dean of the Conservatory of Fine Arts in 1919. In 1920, Hanson composed The California Forest Play, his earliest work to receive national attention. Hanson also wrote a number of orchestral and chamber works during his years in California, including Concerto da Camera, Symphonic Legend, Symphonic Rhapsody, various solo piano works, such as Two Yuletide Pieces, and the Scandinavian Suite, which celebrated his Lutheran and Scandinavian heritage.[3]

In 1921 Hanson was the first winner of the Prix de Rome in Music (the American Academy's Rome Prize), awarded for both The California Forest Play and his symphonic poem Before the Dawn. Thanks to the award, Hanson lived in Italy for three years. During his time in Italy, Hanson wrote a Quartet in One Movement, Lux Aeterna, The Lament for Beowulf (orchestration Bernhard Kaun), and his Symphony No. 1, "Nordic", the premiere of which he conducted with the Augusteo Orchestra on May 30, 1923. The three years Hanson spent on his Fellowship at the American Academy were, he considered, the formative years of his life, as he was free to compose, conduct without the distraction of teaching - he could devote himself solely to his art.

(It has been incorrectly stated that Hanson studied composition and/or orchestration with Ottorino Respighi, who studied orchestration with Nikolay Rimsky-Korsakov. Hanson's unpublished autobiography refutes the statement, attributed to Ruth Watanabe, that he had studied with Respighi.)

Upon returning from Rome, Hanson's conducting career expanded. He made his premiere conducting the New York Symphony Orchestra in his tone poem North and West. In Rochester, New York in 1924, he conducted his Symphony No. 1. This performance brought him to the attention of George Eastman.

Hanson held the position of director for forty years, during which he created one of the most prestigious music schools in America. He accomplished this by improving the curriculum, bringing in better teachers, and refining the school's orchestras. Also, he balanced the school's faculty between American and European teachers, even when this meant passing up composer Béla Bartók. Hanson offered a position to Bartók teaching composition at Eastman, but Bartók declined as he did not believe that one could teach composition. Instead, Bartók wanted to teach piano at the Eastman School, but Hanson already had a full staff of piano instructors.

In 1925, Hanson established the American Composers Orchestral Concerts. Later, he founded the Eastman-Rochester Orchestra, which consisted of first chair players from the Rochester Philharmonic Orchestra and selected students from the Eastman School. He followed that by establishing the Festivals of American Music. Hanson made many recordings (mostly for Mercury Records) with the Eastman-Rochester Orchestra, not only of his own works, but also those of other American composers such as John Alden Carpenter, Charles Tomlinson Griffes, John Knowles Paine, Walter Piston, and William Grant Still. Hanson estimated that more than 2000 works by over 500 American composers were premiered during his tenure at the Eastman School.

To celebrate the 50th anniversary of the Boston Symphony Orchestra, Serge Koussevitzky commissioned Hanson's Symphony No. 2, the "Romantic", and premiered it on November 28, 1930. This work was to become Hanson's best known. One of its themes is performed at the conclusion of all concerts at the Interlochen Center for the Arts. Now known as the "Interlochen Theme", it is conducted by a student concertmaster after the featured conductor has left the stage. Traditionally, no applause follows its performance. It is also best known for its use in the end credits of the 1979 Ridley Scott film Alien.[4]

In some ways Hanson's opera Merry Mount (1934) may be considered the first fully American opera. It was written by an American composer and an American librettist on an American story, and was premiered with a mostly American cast at the Metropolitan Opera in New York in 1934. The Opera received fifty curtain calls at its Met premiere, a record that still stands. In 1935 Hanson wrote "Three Songs from Drum Taps", based on the poem by Walt Whitman.

From 1946 to 1962 Hanson was active in United Nations Educational, Scientific and Cultural Organization (UNESCO). UNESCO commissioned Hanson's Pastorale for Oboe and Piano, and Pastorale for Oboe, Strings, and Harp, for the 1949 Paris conference of the world body.

Frederick Fennell, conductor of the Eastman Wind Ensemble, described Hanson's first band composition, the 1954 Chorale and Alleluia as "the most awaited piece of music to be written for the wind band in my twenty years as a conductor in this field". Chorale and Alleluia is still a required competition piece for high school bands in the New York State School Music Association's repertoire list. It is one of Hanson's most frequently recorded works.

From 1961-1962, Hanson took the Eastman Philharmonia, a student ensemble, on a European tour which passed through Paris, Cairo, Moscow, and Vienna, among other cities. The tour showcased the growth of serious American music for Europe and the Middle East.[5]

Excerpts from his Symphony #2 were used to accompany several exterior sequences and the end credits in the released versions of Ridley Scott's 1979 horror movie Alien[7] without his permission, but Hanson decided not to fight it in court.[8]they replaced certain sections of the late Jerry Goldsmith's original score at the behest of 20th Century Fox. This highlighted music can still be found on most DVD versions of Alien.

This article uses material from the article Howard Hanson from the free encyclopedia Wikipedia and it is licensed under the GNU Free Documentation License.