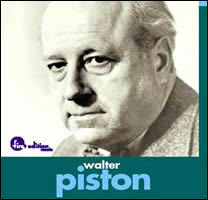 Piston was born in Rockland, Maine. His paternal grandfather, a sailor named Antonio Pistone, changed his name to Anthony Piston when he came to America from Genoa, Italy. In 1905, the composer's father Walter Piston Sr. moved with his family to Boston.

Walter Jr. first trained as an engineer at the Mechanical Arts High School in Boston, but he was artistically inclined. Upon graduating in 1912, he proceeded to the Massachusetts Normal Arts School, where he completed a course of study in draftsmanship in 1916.[1]

During the 1910s Walter Piston made a living playing piano and violin in dance bands and later playing violin in orchestras led by Georges Longy.[2] During World War I, Piston joined the U.S. Navy as a band musician, after rapidly teaching himself to play the saxophone; he later stated that, when "it became obvious that everybody had to go into the service, I wanted to go in as a musician".[3] Playing in a service band, Piston taught himself to play most of the wind instruments. "They were just lying around" he later observed, "and no one minded if you picked them up and found out what they could do".[4]

Piston was admitted to Harvard in 1920, where he studied counterpoint with Archibald Davison, canon and fugue with Clifford Heilman, advanced harmony with Edward Ballantine, and composition and music history with Edward Burlingame Hill. Piston often worked as an assistant to the various music professors there, and conducted the student orchestra.[5]

Piston's only dance work, The Incredible Flutist, was written for the Boston Pops Orchestra, which premiered it with Arthur Fiedler conducting on May 30, 1938. The dancers were Hans Weiner and his company. Soon after, Piston arranged a concert suite including "a selection of the best parts of the ballet." This version was premiered by Fritz Reiner and the Pittsburgh Symphony Orchestra on November 22, 1940. Leonard Slatkin and the Saint Louis Symphony Orchestra included the suite in a 1991 RCA Victor CD recording that also featured Piston's Three New England Sketches and Symphony No. 6.[11]

Piston studied the twelve-tone technique of Arnold Schoenberg and wrote works using aspects of it as early as the Sonata for Flute and Piano (1930) and the First Symphony (1937). His first fully twelve-tone work was the Chromatic Study on the Name of Bach for organ (1940), which nonetheless retains a vague feeling of key.[12] Although he employed twelve-tone elements sporadically throughout his career, these become much more pervasive in the Eighth Symphony (1965) and many of the works following it: the Variations for Cello and Orchestra (1966), Clarinet Concerto (1967), Ricercare for Orchestra, Fantasy for Violin and Orchestra (1970), and Flute Concerto (1971).[13]

In 1943, the Alice M. Ditson fund of Columbia University commissioned Piston's Symphony No. 2, which was premiered by the National Symphony Orchestra on March 5, 1944 and was awarded a prize by the New York Music Critics' Circle. His next symphony, the Third, earned a Pulitzer Prize, as did his Symphony No. 7. His Viola Concerto and String Quartet No. 5 also later received Critics' Circle awards.[2]

Piston wrote four books on the technical aspects of music theory which are considered to be classics in their respective fields: Principles of Harmonic Analysis, Counterpoint, Orchestration and Harmony. The last of these went through four editions in the author's lifetime, was translated into several languages, and (with changes and additions by Mark DeVoto) was still regarded as recently as 2009 as a standard harmony text.[14]

(The Suite from "The Incredible Flutist" has been transcribed for symphonic wind ensemble by MSgt Donald Patterson and recorded by Col. Michael Colburn with "The President's Own" United States Marine Band.)[18]

This article uses material from the article Walter Piston from the free encyclopedia Wikipedia and it is licensed under the GNU Free Documentation License.