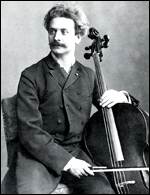 Popper was born in Prague, and studied music at the Prague Conservatory.[2] His family was Jewish.[3][4] He studied the cello under Julius Goltermann (1825–1876), and soon attracted attention. He made his first tour in 1863; in Germany he was praised by Hans von Bülow, son-in-law of Franz Liszt, who recommended him as Chamber Virtuoso in the court of Prince von Hohenzollern-Hechingen in Löwenberg. In 1864, he premiered Robert Volkmann's Cello Concerto in A minor, Op. 33, with Hans von Bülow conducting the Berlin Philharmonic. He lost this job a couple of years later due to the prince's death.

He made his debut in Vienna in 1867, and was made principal cellist at the Hofoper. From 1868 to 1870 he was also a member of the Hellmesberger Quartet.[5] In 1872, he married pianist Sophie Menter,[2] a pupil of Liszt. She later joined the staff at the St. Petersburg Conservatory. In 1873, Popper resigned from his post at the Hofoper so as to continue his tours with his wife on a larger scale, giving concerts throughout Europe. Popper's and Menter's marriage was dissolved in 1886.

That year, Liszt recommended Popper for a teaching position at the newly opened string department at the Conservatory at Budapest. In Budapest, he participated in the Budapest Quartet with Jenő Hubay.[6] He and Hubay performed chamber music on more than one occasion with Johannes Brahms, including the premiere of Brahms's Piano Trio No. 3 in Budapest, on December 20, 1886.[7]

Popper died in Baden, near Vienna.[2]

David Popper was one of the last great cellists who did not use an endpin. An 1880 drawing of Popper playing in a string quartet shows that although he started his cello career without using an endpin, he adopted it later in his life.[8]

Popper was a prolific composer of cello music, writing four concertos, a Requiem for three cellos and orchestra (1891) and a number of smaller pieces which are still played today, including the solo piece Tarantella. His shorter showpieces were written to highlight the unique sound and style of the cello, extending the instrument's range with pieces such as Spinnlied (Spinning Song), Elfentanz (Dance of the Elves), or the Ungarische Rhapsodie (Hungarian Rhapsody), which was published by the Friedrich Hofmeister Musikverlag.[9] He also wrote instructional pieces. Popper is also known for his High School of Cello Playing (Op. 73), a book of cello études that is widely used by advanced cello students.

An old edition of the Grove Dictionary of Music and Musicians described him thus: "His tone is large and full of sentiment; his execution highly finished, and his style classical."

Works with unknown or no opus number

Arrangements and transcriptions for cello and piano

This article uses material from the article David Popper from the free encyclopedia Wikipedia and it is licensed under the GNU Free Documentation License.

Joseph Haydn Sinfonie Nr. 73 D-Dur "La Chasse"
Update Required To play the media you will need to either update your browser to a recent version or update your Flash plugin.