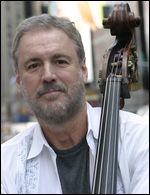 Nilson Matta is a premier Brazilian bassist and composer. He has been based in New York City since 1985. He is also known for his work with Trio Da Paz, Don Pullen African Brazilian Connection, Joe Henderson, Yo Yo Ma and Nilson Matta's Brazilian Voyage.

Nilsons latest project, called Nilson Mattas Brazilian Voyage, is an exciting group playing many of Mattas original songs mixed with Brazilian standards. For this album, Nilson called Harry Allen, Anne Drummond, Klaus Mueller, Ze Mauricio and Mauricio Zotterelli into the studio. The album, produced by Nilson and Luisa Matta is dedicated to his native country of Brazil. It literally takes the listener on a Brazilian Voyage through the many regions of that country.

After moving to New York City, Nilson co-founded the project The African Brazilian Connection with legendary pianist Don Pullen. The group released three critically acclaimed albums on Blue Note Records. Nilson then started a project of his own with longtime friends Romero Lubambo and Duduka da Fronseca - Trio Da Paz. The trio quickly gained the distinction of one of the foremost Brazilian Jazz groups in the world and after 5 albums, they are more in demand than ever.

From 1995 through 1998, Matta worked extensively with four-time Grammy Award winning saxophonist Joe Henderson. Nilson played a vital role in the recording of the album Joe Henderson Big Band, which went on to take home the GRAMMY for Best Large Jazz Ensemble Performance in 1998. When Yo Yo Ma went looking for band members to fill out his new Brazilian project, Nilson was the obvious choice on bass. He recorded Obrigado Brazil and Obrigado Brazil Live in Carnegie Hall Concert with Yo Yo Ma both of which were GRAMMY winners. These albums prompted a worldwide tour that lasted for 2 years and touched every corner of the globe. Most recently, Nilson recorded with Yo Yo Ma on his album Songs of Joy & Peace in 2008. Since 2006, Nilson has been focused on many of his own projects. That year he released Walking With My Bass, which was released to numerous accolades in publications around the world.

Matta also focuses his efforts on passing on his talents and experiences to the next generation of bassists. He is a member of the International Society of Bassists and often appears as a featured guest and performer at their conventions. Matta is also well known for his teaching ability, which has been showcased in different settings through the country. Nilson gives lessons to young bassists in addition to his world-renowned master classes. He has been teaching at Litchfield Jazz Campus. In Bar Harbor, Maine, Nilson is a faculty member and one of the Director of Samba meets Jazz. www.sambameetsjazz.com

This article uses material from the article Nilson Matta from the free encyclopedia Wikipedia and it is licensed under the GNU Free Documentation License.