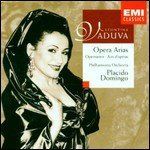 Leontina Vaduva [Vduva] (born in Roiile, on December 1, 1960) is an acclaimed Romanian soprano. She studied at the Bucharest Conservatory and with Ileana Cotruba, and debuted in the title role of Manon at Toulouse, in 1987. A recipient of the Laurence Olivier Opera Award, she has often appeared at Covent Garden, in Rigoletto (opposite Ingvar Wixell and Jerry Hadley, 1989), Carmen (as Micaëla, 1991 and 1994), and Roméo et Juliette (1994).

In 2000, Vaduva appeared at the Metropolitan Opera, in six performances of La bohème (as Mimì, with Luis Lima). The soprano has also sung with the companies of Buenos Aires, Barcelona, Cologne, Vienna, and Paris.

This article uses material from the article Leontina Vaduva from the free encyclopedia Wikipedia and it is licensed under the GNU Free Documentation License.