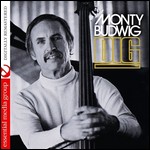 Monty Rex Budwig (December 26, 1926 – March 9, 1992) was a West Coast jazz double bassist. He was born in Pender, Nebraska. He began playing bass during high school, continuing in the military band while he was enlisted in the Air Force.

In 1954 he moved to Los Angeles and went on to record and perform with many notable jazz musicians (Carmen McRae, Barney Kessel, Woody Herman, Red Norvo, Scott Hamilton, and Shelly Manne).

Budwig is known for his touring with the Vince Guaraldi trio in the 1960s, with either Don Joham or Colin Bailey on drums, and he performed on the Charlie Brown Christmas Album and the album Jazz Impressions of Black Orpheus which had a hit song "Cast Your Fate to the Wind". He released one recording as a leader (Dig on the Concord label).

This article uses material from the article Monty Budwig from the free encyclopedia Wikipedia and it is licensed under the GNU Free Documentation License.