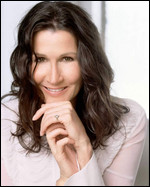 Her albums include 'Ultimate Mancini', 'Cinema Paradiso', 'Monica Mancini' and 'Dreams of Johnny Mercer'. Her voice was heard on the soundtrack of the 2002 film Ghost Ship when she sang 'Senza Fine'. [2]

Monica Mancini was born in 1952 to the late Henry Mancini and his wife Ginny O'Conner. She has a twin sister (Felice) and a brother. Her brother is singer and actor Chris Mancini.[2] Monica began singing at an early age in the Henry Mancini Chorus. This early experience has led to a successful studio career in Los Angeles in the 1990s and 2000s. Since becoming a solo artist in Los Angeles, Monica has appeared in film scores and recordings with Plácido Domingo, Quincy Jones and Michael Jackson. She released her debut album, Monica Mancini in 1998 as a companion to her PBS television special Monica Mancini: On Record from the same year.[1]

Since 1998, Ms. Mancini has performed in orchestral concerts and on TV. She was nominated for Grammy awards twice in 2005 for her album Ultimate Mancini. Her TV performances include the PBS special Great Performances, Evening at Pops with John Williams and the Boston Pops, and multi-network charity concert Stand Up To Cancer. She also undertook a 60-city tour in 2004 to celebrate the USPS release of the Henry Mancini commemorative postage stamp in honor of her late father.[1] In 2009, Mancini sang with the Los Angeles Philharmonic Orchestra at the Hollywood Bowl. Included in her performance were 'It Had Better Be Tonight', from the film The Pink Panther, and 'Two for the Road'. She released her album I Loved These Days in the summer of 2010. She has not released a new album since 2010 and according to her website, Monica finished her 2013 tour in November. There are no known concert plans as yet for the 2014 season.[1]

This article uses material from the article Monica Mancini from the free encyclopedia Wikipedia and it is licensed under the GNU Free Documentation License.