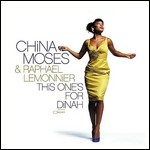 China Moses is the daughter of jazz singer Dee Dee Bridgewater and director Gilbert Moses.[1] She released her first single "Time" (1996) at the age of 18, along with her first video directed by Jean-Baptiste Mondino. This was followed by three albums: China (1997), On tourne en rond ("We Turn Around") (2000), and Good Lovin (2004). She worked on her albums with Swedish hip hop label Breaking Bread as well as artists such as DJ Mehdi, Diam’s, Karriem Riggins, Guru, Anthony Marshall, and sound engineer Bob Power.

She has appeared on music channels such as MCM (1999–2001) and MTV France (2004–2011). In 2011 she joined the team for the 8th season of French TV show Le Grand Journal on Canal+, which she left in July 2012. From October 2011 to December 2012 she presented Jazz Radio’s Made in China, a daily program which aired from 7pm to 8pm. In a bid to manage her activities as an entertainer, China launched her own production company, MadeInChina Productions, in 2008.

Moses and French pianist Raphaël Lemonnier created a show called Gardenias for Dinah, a tribute to their mutual idol Dinah Washington, who was also the inspiration for the album This One’s for Dinah which was released in 2009 by Blue Note.

After their worldwide tour which included Europe, India, Lebanon, Canada, and Japan, Moses and Lemonnier's next work was a tribute to the great blues and jazz female singers who have inspired Moses or have influenced her. They include Dinah Washington ("Resolution Blues", "You’re Crying") and some of her precursors and peers: Mamie Smith ("Crazy Blues"), Lil Green ("Why Don't You Do Right?"), as well as stars like Esther Phillips ("Cherry Wine (Little Esther song)"), Nina Simone ("Just Say I Love Him", "Work Song"), Etta James ("I Just Wanna Make Love to You"), Janis Joplin ("Move Over"), and Donna Summer ("Hot Stuff"). Other songs have been adapted specifically for stage performances such as: "Kitchen Man" by Bessie Smith, "Today I Sing the Blues" by Helen Humes and Aretha Franklin, and "Love Me or Leave Me" sung by Billie Holiday. Moses has said: "Our stage performances are organized like a show. I love to tell stories, I see myself as a jazz storyteller and I like to make sure that people smile in between songs."Ref? The album Crazy Blues was released in 2012.

In 2013, she became a music expert consultant to the French electricity supplier ERDF. She hosted the TV documentary Soul Power as part of the summer series Summer of Soul on Arte.

In addition to her participation on André Manoukian's album So in Love (2010, Blue Note France/EMI), Moses presented a new show in the fall of 2013 featuring torch songs such as "Don't Let Me Be Misunderstood", "Lullaby of Birdland" and "I've Got You Under My Skin". Additionally, she performs in Cafe Society Swing, a show written and produced by Alex Webb that revives the good times of the legendary 1940s New York nightclub, Cafe Society, which promoted racial equality and progressive causes, and where "Strange Fruit" was performed for the first time by Billie Holiday.

On several occasions Moses has shared the stage with her mother, Dee Dee Bridgewater, accompanied by orchestras such as the Deutsches Filmorchester Babelsberg and the WDR Big Band.

This article uses material from the article China Moses from the free encyclopedia Wikipedia and it is licensed under the GNU Free Documentation License.