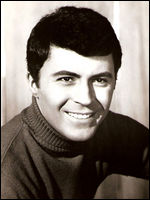 Born in Philadelphia, on June 8, 1936, of Italian descent, Darren began his career as a teen idol, having been discovered by talent agent and casting director Joyce Selznick. Darren later described it:

I was studying acting in New York City with Stella Adler. I'd been studying with her for a couple of years. I went to see some agents in New York and they said in order to get work, you need to have photographs taken. As I was walking down Broadway after class one day, I saw this photographer's studio, Maurice Seymour. I went in and had pictures taken. I went back to look at the proofs and his secretary, a woman by the name of Yvonne Bouvier, asked me if I was interested in getting into film. I said yeah, I was. She said I know someone you should meet. She set up a meeting between me and Joyce Selznick, who worked for Screen Gems. I went down to 1650 Broadway, the Brill Building. On my way to a meeting with Joyce, we just happened to get on the elevator at the same time. She kept staring at me. I never met her. She never met me. We got off at the same floor and walked to the same office. That was our meeting. Joyce brought me over to Columbia Pictures about a week later and got me a contract there.[1]

A few weeks later Darren was cast in the lead role for Rumble on the Docks (1956).[2][3] This got him a lot of fan mail and the studio cast him in The Brothers Rico and Gunman's Walk.

He notably played Moondoggie and recorded the title song for the movie Gidget, starring Sandra Dee and Darren in 1959, and recorded a string of pop hits for Colpix Records, the biggest of which was "Goodbye Cruel World" (#3 on the Billboard Hot 100 in 1961). It sold over one million copies, and was awarded a gold disc.[4] Another sizeable hit was "Her Royal Majesty" (#6 on the Billboard Hot 100 in 1962). He is also featured in one of the Scopitone series of pop music video jukebox films ("Because You're Mine").

Darren's role in the World War II film The Guns of Navarone (1961) was an attempt to break out of his teen image. Darren:

The people handling my career at that point didn't really take advantage of it. I did another Gidget film which I hated (Gidget Goes to Rome) and I didn't want to do it. I thought that I'd be doing those for the rest of my life, but I also did a film called Diamond Head in-between those two films, which had some wonderful characters and a great cast. Sure, it did help. Even today, Navarone has helped. I mean, here we are today talking about Navarone. When you're in a classic film like that, it lasts forever.[7]

In 1963, he signed a seven picture deal with Universal, starting with The Lively Set.[8]

He was the singing voice of Yogi Bear in the animated film, Hey There, It's Yogi Bear! (1964), on the song "Ven-e, Ven-o, Ven-a". Prior to that, he was the singing voice of his own character "Jimmy Darrock" on an episode of The Flintstones. However the character's dialogue was provided by voice actor Lennie Weinrib. He then achieved success co-starring as impulsive scientist and adventurer Tony Newman on the science fiction series, The Time Tunnel (1966–1967).

In the 1970s, Darren appeared as a celebrity panelist on Match Game.

Later Darren had a regular role as Officer James Corrigan on the television police drama T. J. Hooker from 1983 to 1986. Subsequently, he worked as a director on many action-based series, including Hunter, The A-Team and Nowhere Man, as well as dramas such as Beverly Hills, 90210 and Melrose Place.[9]

In 1998, he achieved renewed popularity as a singer through his appearances on Star Trek: Deep Space Nine in the role of holographic crooner and advice-giver Vic Fontaine; many of his performances on the show were re-recorded for the album This One's from the Heart (1999).[10] The album showed Darren, a close friend of Frank Sinatra, comfortably singing in the Sinatra style; the 2001 follow-up Because of You showed similar inspiration from Tony Bennett.

In 1955, Darren married Gloria Terlitsky, his sweetheart since 1953. Her father opposed their marriage because Terlitsky was Jewish while Darren was Catholic. Darren and Terlitsky had a son James Jr., or Jimmy, and divorced in 1958. James Jr. was adopted by Gloria's third husband, and is now known as journalist and TV commentator Jim Moret.[11] Two years after the divorce, Darren married Evy Norlund, Miss Denmark 1958. They had two sons, Christian (born c. 1960) and Anthony (born c. 1964).[12][13]

This article uses material from the article James Darren from the free encyclopedia Wikipedia and it is licensed under the GNU Free Documentation License.