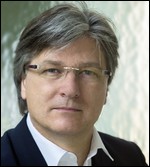 born in 1963 in Schwenningen, Baden-Württemberg, Germany

He studied in Trossingen, Paris and New York.

His recording (in 2000) of Bach's lute works (original versions) played on a multi-string guitar has been called the "a new reference recording of Bach's luteworks on the guitar" by Fono Forum and has received multiple 5-star ratings (BBC Music Magazine, Classic CD), praises.. & awards (Diapason d’Or, etc.).[1]

In 1994 he was awarded the Grand Prix du Disque of the L'Académie Charles Cros for his recording of Maurice Ohana's complete works for guitar (on the ten-string guitar).

This article uses material from the article Stephan Schmidt from the free encyclopedia Wikipedia and it is licensed under the GNU Free Documentation License.