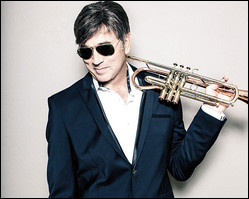 Braun's mother was a self-taught pianist and banjoist. Braun played drums in high school, then followed his brother in playing the trumpet.[2] In the 1970s, he attended the Eastman School of Music, and while a student there became a member of a jazz-fusion band, Auracle.[1][3] The band worked with producer Teo Macero, and Braun co-produced the second album.

During the 1980s, he entered the pop music world. He released an album in Japan as a singer, then worked as a songwriter for Lorimar (Warner Chappell). He wrote the song "Here with Me" with REO Speedwagon, and it became a top twenty hit.[1][3] When he returned to the trumpet, he worked as a studio musician and touring member with Crowded House, Natalie Cole, Glenn Frey, Tom Petty, Sade, Rod Stewart, Tina Turner, and War.[3]

He released his debut solo album, Intimate Secrets (Mesa, 1992), followed by Night Walk and Christmas Present. His popularity increased enough by 1995, when he released Beat Street, that he was persuaded to pursue a solo career.[1][4]

He has cited as influences Miles Davis, Lee Morgan, Chet Baker, Clark Terry, Dizzy Gillespie and Herb Alpert, with the last one inspiring his album All It Takes including a song called "Tijuana Dance" (a play on Alpert's band Tijuana Brass).[3] One of his influences was Freddie Hubbard, and Braun composed a song, "Freddie Was Here" in 2008, which he recorded on his album, All it Takes, in tribute to Hubbard, who died that year.[5]

In 2005, he and saxophonist Richard Elliot co-founded ARTizen Music Group (now known as Artistry Music) and once had Rykodisc as a distributor.[10]

This article uses material from the article Rick Braun from the free encyclopedia Wikipedia and it is licensed under the GNU Free Documentation License.