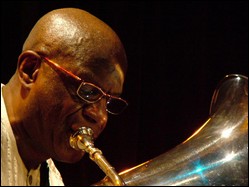 Bob Stewart (born February 3, 1945 in Sioux Falls, South Dakota),[1] is an American tuba player.[2] He received his Bachelor of Music Education degree from the Philadelphia College of the Performing Arts and his Masters in Education from Lehman College Graduate School.[2] Stewart taught music in Pennsylvania public schools and at the Fiorello H. LaGuardia High School of Music & Art and Performing Arts in New York City.[1] He is now a professor at the Juilliard School and is a "Distinguished Lecturer" at Lehman College.[2]

With Dizzy Gillespie and Machito

This article uses material from the article Bob Stewart (musician) from the free encyclopedia Wikipedia and it is licensed under the GNU Free Documentation License.

Ludwig van Beethoven 2.Satz aus Sinfonie Nr.7 A-Dur
Update Required To play the media you will need to either update your browser to a recent version or update your Flash plugin.